100,000 conversions and counting, meet the ex-Hindu who herds souls to the Hereafter

100,000 conversions and counting, meet the ex-Hindu who herds souls to the Hereafter

The 70-year-old has a progra­mme to ease them into Islam’s requir­ements.
By Sameer Mandhro
Published: January 23, 2012
Tweet Email 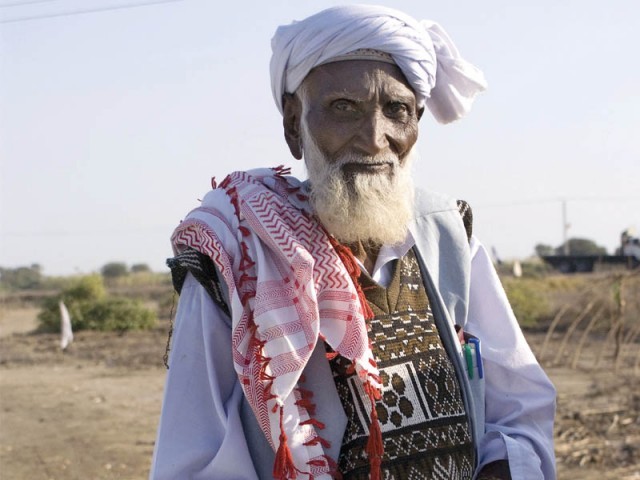 Deen Mohammad converted to Islam in 1989. He said when he read the Holy Quran he realised that 360 gods were useless. PHOTO:AYESHA MIR/EXPRESS

MATLI: Such are Deen Mohammad Shaikh’s powers of persuasion that he has converted 108,000 people to Islam since 1989, the year he left his birth religion Hinduism behind.

His multi-coloured business card describes the Matli dweller as the president of the Jamia Masjid Allah Wali and Madrassa Aisha Taleem-ul Quran – an institute for conversions to Islam.

The reedy 70-year-old brandishes an embellished cane. A red-and-white keffeiyah perched on his shoulder offers people a hint to his theological leanings.

As he speaks to The Express Tribune, his arm slices an invisible arc through the air. He is gesturing to a vast expanse of nine acres of donated land where converts are invited to pitch a tent and stay. “My heartfelt wish is that the entire world becomes Muslim,” comes his response, when asked about the en masse conversions. His piety is matched only by its ambition.

But contrary to the grandiose proclamation, this preacher isn’t a repository of rehearsed sound bites. It is only after he settles down on a charpoy that he deigns to embark on the journey of a Hindu named Jhangli who became an expert in evangelism.

“I always loved Islam,” he begins. “I read the Holy Quran and realised that 360 gods were not of any use to me.”

At first he had to study the Holy Quran in secret. There was the risk of being misunderstood if a Muslim caught him with the holy book. He started fasting and in fact he would begin a day before Ramazan started.

Shaikh’s mother grew alarmed at her son’s forays into another faith. She thought that if she married him off, he would not ‘leave’. Thus, he was barely 15 when his wedding took place, followed by a quick overtaking by nature – four girls and eight boys.

But despite this, he was drawn back to his curiosity and managed to find a teacher, Sain Mohammad Jagsi, who instructed him in the Holy Quran and Hadiths or sayings of the Prophet Mohammad (pbuh).

Fortunately, Shaikh’s uncle was of the same mind and the two men agreed that they would give each other the strength. Shaikh held off until his daughter was married to a Hindu as planned, since he had already “given his word”. Then there was no turning back.

After his conversion, Deen Mohammad Shaikh made it his mission to woo others. He began in his own backyard, preaching to family, before venturing beyond this comfort zone. Encounters with the rich and powerful helped pave the way. Retired Pakistan Army general Sikandar Hayat, who owns a sugar mill in Matli, offered Shaikh money, which he turned down. Instead, he urged Hayat to give jobs to some of the new converts. Hayat and his daughter proved extremely helpful in providing assistance.

Now, Shaikh says, his fame has spread and people come to him from as far as Balochistan, members of all religions and sects, who would like to convert. A small mosque has sprung up in his residential compound along with a number of rooms where children – mostly girls – are taught how to say their prayers and recite the Holy Quran.

One of the teachers is 14-year-old Sakina, who is just 15 days into the job. “Only a few students are difficult to teach,” she says while commenting on their ability to recite a text in an unknown language.

Shaikh is aware of the difficulties converts face while taking on what appear to be the initially daunting rigours of a brand new system. He makes life easy for the first 40 days. “They only have to pray farz!” he says while referring to the mandatory parts. This relaxed schedule ensures that they can ‘confirm their faith’. He understands that if he demanded they start out with praying five times a day to offer even the optional and ‘bonus’ parts, “They would run away!” as he puts it with a look of mock horror on his face.

Other than this, he is reluctant to actually explain how he influences the people. All he offers is a nugget of fire and brimstone: “I tell them that I was a Hindu too and that they would burn in Hell if they are not Muslim.”

More than saving a soul

There are other practical considerations that accompany conversions. In order to ‘save’ the converts from influential Hindus in other districts, Shaikh packs them off to Hub Chowk while the Kalima is still moist on their lips. “Their families would beat them up (for converting) otherwise,” he explains.

This trick of the ‘trade’ he learnt from personal experience. He alleges that he was kidnapped along with his daughter-in-law by influential Hindus who threatened him so that he would stop converting people. “They don’t want these poor Hindus to stand up to them when they become Muslims,” Shaikh maintains.

Despite 108,000 conversions, for which a record is kept, Shaikh still doesn’t feel his work is done. He wants everyone to be a Muslim and learn from his example. He also attends the Tablighi Jamaat’s annual congregation in Raiwind, although he doesn’t believe in sectarian divisions. “All groups are like brothers to me,” he declares.