The most import­ant need of people living with vitilg­o is emotio­nal suppor­t.
By Gohar Warraich
Published: January 21, 2012
Tweet Email 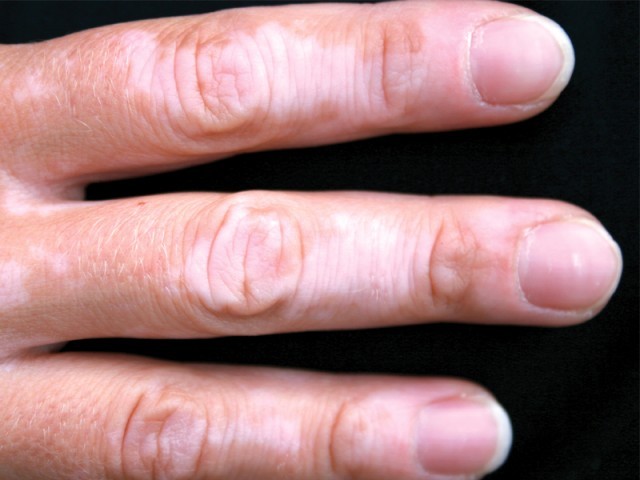 The most important need of people living with vitilgo is emotional support.

There once lived a boy in Indiana, US, unaware that he was going to be crowned the prince of the music industry. Yes it was none other than the King of Pop Michael Jackson. Everything about the iconic public figure was made headlines– his loafers, white socks, red leather jacket and the fedora on his head. Recently, one of his accessories — a silver glove he used to wear during the 1980s, just when he premiered his moonwalk — was recently auctioned off for a whopping $350,000.

While many people think of the glove as a fashion statement by the deceased pop legend, they don’t know that he actually started wearing it because of vitilgo.

Vitiligo is a skin disease in which the skin’s pigment producing cells are destroyed leading to the appearance of a white patch. It can begin in various parts of the body, such as limbs, fingers, feet, trunk, armpits, face and so on. Even its progress varies from case to case; new lesions may or may not follow a symmetrical pattern. In some cases, there might not be any progression and in a few there might even be spontaneous regimentation.

Multiple theories have been put forward on the causes and mechanism of the disease, but the debate has still not been settled. If one was to go by the local lore, eating a combination of fish and milk leads to the condition. The roots of this myth have been traced to the Jewish dietary laws which promulgate segregation of meat and dairy products. A family history of vitiligo does slightly increase the chances of acquiring it. The body itself is somehow thought to attack the cells in our skin which give us our colour, known in medical jargon as an autoimmune disease.

A number of treatment options are available, though, none guarantee a complete cure and are again not without side effects. The dermatologist can prescribe steroids for local or topical use. These can cause atrophy of the skin and formation of purple colored streaks if potent formulations are used. A more promising choice is phototherapy. Ultraviolet light exposure is used in combination with certain medication and two or three visits are required every week for a few months. However, not only is it not widely available, it can lead to sun burns, blisters, itching, nausea, vomiting and so on. Another, option is depigmentation of skin which entails bleaching the skin to match the white skin, but makes one more sensitive to sunlight. It is rumoured that this is the treatment that Michael Jackson sought, though he had denied this on various occasions.

Since vitilgo cannot be completely cured, the hardest thing to battle is the psychological ramifications that come with having a conspicuous skin disease visible, open to all for scrutiny. The most important need of people living with vitiligo, by far, is emotional support.

Gem exhibition: Discovering the treasures ‘beneath our feet’