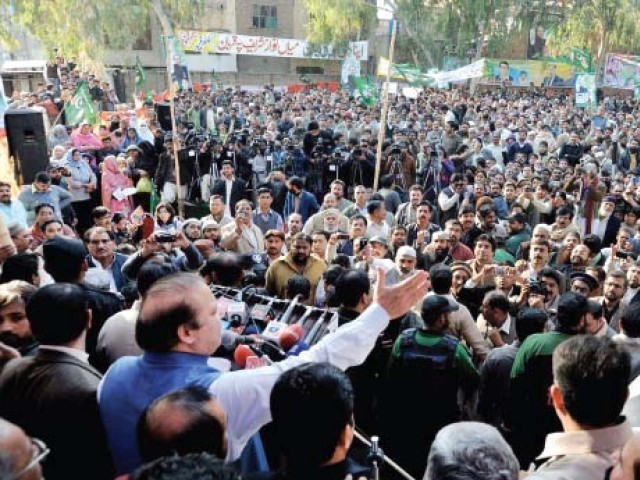 The Pakistan Muslim League-Nawaz has set off visits to different areas in Punjab in hopes of achieving their target of a minimum of 100 seats in the lower house of parliament, in the upcoming general elections.

The move follows the Pakistan Peoples Party-led government’s response that the opposition parties’ call for general elections will be contemplated after the Senate elections.

Sources in the PML-N said that the party has set a target to achieve 100 seats out of 148 from Punjab in the National Assembly to form their government in the next general elections.

In this regard, PML-N chief Nawaz Sharif, along with senior leaders, visited Sargodha and Sangla Hill, Nankana Sahib district, on Wednesday.

Sources in the PML-N told The Express Tribune that opposition parties’ representatives, who met the prime minister last week, informed Nawaz that the government ‘partially’ accepted their demands regarding the general elections. They added that the government would announce and contemplate the demands after the Senate elections.

‘No change in Centre for  6 months’

Sources said that the government and the opposition will continue their negotiations, which include such points as installing a caretaker set-up, forming an independent election commission and holding general elections.

They added that Nawaz has also been informed that PPP leaders will try to linger on the NRO case through Aitzaz Ahsan and will write a letter to the Swiss courts as a last resort.

This was also confirmed by sources in the PPP but they added that the party was divided over the issue. One group, led by Nazar Muhammad Gondal, Qamar Zaman Kaira and Aitzaz Ahsan, are in favour of writing the letter; whereas the other, led by Babar Awan and Interior Minister Rehman Malik, opposes the idea.

Sources in the PML-N further said that Nawaz has asked party members to make the most of their time in their constituencies for the next six months, as there is no possibility of a change of government in the Centre.

‘PML-N will not resign’

Punjab Law Minister Rana Sanaullah Khan while talking to The Express Tribune said that the PML-N will not give in their resignation at any cost because it does not want to give free space to the coalition government to name an opposition leader, caretaker prime minister or hold elections under their own set-up.

Sanaullah also claimed the establishment is forcing them to resign from the assemblies to fulfill ‘its plan’ for the upcoming elections.

Further elaborating, he said that the establishment wanted to see a ‘contest’ between the PPP and PTI.

While addressing a public gathering in Sargodha, where he had gone to condole over the death of MNA Ch Abdul Hameed, Nawaz said that if the PML-N was voted to power, Pakistan would become the Asian tiger on the map of the world.

While careful not to mention PTI chairman Imran Khan by name, Nawaz particularly urged the youth to understand the reality of ‘a person’ who is ‘cheating’ them on the pretext of change.

He said that there were a lot of ‘people’ in Punjab who wish to deceive the youth – something, he added, he would never do. He added that these deceivers do not have any vision, while he has an experience of 25 years in making the country prosperous.

In Nankana Sahib Sangla Hill, the PML-N chief condoled with MNA Ch Birjees Tahir over the death of his brother.

While addressing a public gathering, Nawaz asked people to wait a minimum of six months, after which, he hoped, he would come into power and bring change in the country.