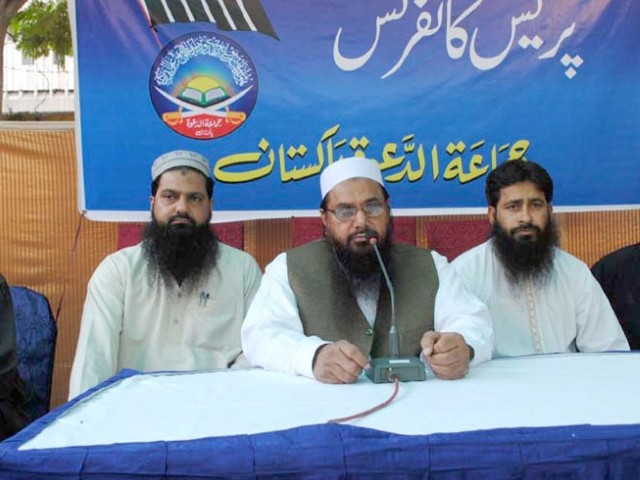 “We will not let Pakistan go in to the hands of secular forces in Pakistan and that they have no attachment or relation with Pakistan.” PHOTO: NNI

MULTAN: The Jamaatud Dawa (JuD) said on Wednesday that their January 29 Difa-e-Pakistan gathering would be attended by Pakistan Tehreek-i-Insaf chairman Imran Khan,  Jamaat-e-Islami (JI) chief Munawar Hassan  and Awami League chief Sheikh Rasheed among other religious and political party leaders. The JuD added that they had confirmed their presence for the rally.

Addressing a gathering in Multan, the JuD leadership vowed that they would not step back and demanded the political and military leadership devise their decisions and policies keeping this in mind.

JuD has been very active recently in trying to unite people for the Difa-e-Pakistan convention in Multan on January 29.

JuD added that only an nuclear capable and armed Pakistan can survive in the future and that it should be defended at every cost.

They said that conspiracies were being hatched against Pakistan’s nuclear arsenal, in the shape of declaring the country a failed or terrorist state.

‘Secular forces have no attachment to Pakistan’

Hafiz Saeed, President JuD, said “we will not let Pakistan slide into the hands of secular forces in Pakistan as they have no attachment or relation with Pakistan.”

He added that the nation had come out of its ‘slumber’ and the government too should also come out from “US slavery”.

“The drone attacks are proof that the level of loyalty of the government to the US and western powers is incomparable but at the same time, the fury of the people of Pakistan has also become immeasurable and it will sweep away the government.”

Saeed further said,“ I am happy to see the response of registration from the students, lawyers and civil society and farmers from Punjab for the biggest convention in the history of Pakistan to be held in Multan. We only want to show our hatred for the US and India through this gathering…we want them to etch it on their coffins that the nation is united and will defend the nuclear capability of Pakistan at any cost.”