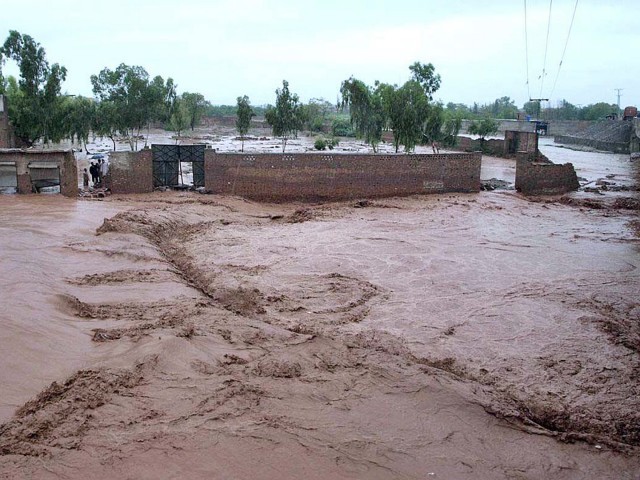 Flash floods have caused severe damage all over the country. PHOTO: APP

Torrential rains continue to wreak havoc as numerous reports of severe damage are coming in from across the country.

Floods in Azad Jammu and Kashmir

Seven people died and as many went missing in land sliding and other rain-related incidents.

People living around the River Jehlum are being shifted to temporary camps while the water level in the river is feared to cross the level 2,000 cusecs in the next few hours. At least ten villages near the River Jehlum have been evacuated.

In a separate incident, a man was killed and seven others are missing when a Rawalpindi-bound passenger van fell into a stream due to slippery road conditions. The van was coming from Muzaffarabad.

In Patika and Jehlum, four people drowned in the river, while two people were also reported to have drowned in Pindi Ghaib.

A new wave of flood turned the situation worse in Rajanpur when 90,000 cusecs of water entered the district last night.

Evacuation has been ordered in the most affected areas of the district as more floods are feared. Standing crops spreading over thousands of acres have also been destroyed.

People are waiting for government support as rescue efforts have yet to start in the area.

Nine villages and many fish farms were taken over by gushing water, as a dam split open in Jafferabad. Fifty other houses collapsed in the Loralai and Zob areas of Balochistan.

Some of the flood hit areas have no means of communication with the rest of the country. The Jalal Khan Dam burst in the Kachi area submerging Shukarabad, Payar Khan Gola, Mehboobabad, Abdur Rehman Arain and Ghaus Pur.

Meanwhile, in the Mehupur area of Jafferabad, a breach in the Shahi Canal left four villages and many fish farms inundated.