What the prime minister should do now

What the prime minister should do now

The bottom line is that when appear­s before the Suprem­e Court, the prime minist­er will have to be flexib­le.
By Editorial
Published: January 17, 2012
Tweet Email 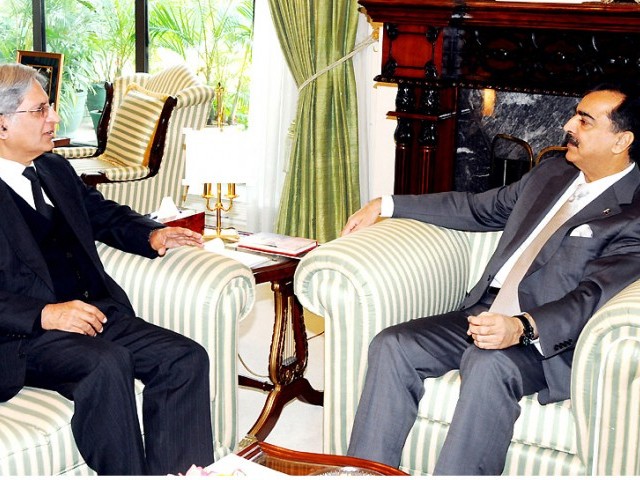 The bottom line is that when appears before the Supreme Court, the prime minister will have to be flexible. PHOTO: INP

Prime Minister Yousaf Raza Gilani has finally been called to the Supreme Court for contempt for not permitting the writing of a letter to the Swiss government withdrawing an earlier letter quashing a Swiss court proceedings against President Asif Ali Zardari following the promulgation of the National Reconciliation Ordinance (NRO). The Court had adjudged the NRO null and void after the National Assembly declined to legislate the ordinance.

Tied to the NRO case is the immunity granted by the Constitution to the President of Pakistan. For its part, the PPP thinks that this issue is not subject to review by the court after sensing that the latter will remove the immunity to expose the president to a punitive decree by the Swiss Court in a case of money laundering. The PPP is vulnerable on many counts — including the political — within its own coalition, its allies thinking it should agree to early elections after negotiating them with the opposition led by the PML-N.

One very cogent force behind this apparent wobbling of the government resolve is its ongoing tussle with the military. The coalition had managed an easy resolution asserting the sovereignty and supremacy of parliament among the institutions of the state. However, it is also the case in most democratic states that all laws can be reviewed/scrutinised by the superior courts to see if they are in line with the letter and spirit of the Constitution. And the authority of the Supreme Court as interpreter of the Constitution is final and there is no cavil with it.

Pile a lot of lethal politics on this and you have the crisis of the Pakistani state on your hands. The issue is not that the government or state is dysfunctional. The real issue is that the military is dominant in Pakistan and calls the shots in foreign policy or any other such issue it considers connected with the security of the state. The Supreme Court tacitly accepts this and will not use its suo motu powers to adjudicate the problem of military dominance under the Constitution or to consider cases in this regard pending before it.

The politicians have developed a Pavlovian reflex about toppling the government. The political opposition inside parliament and outside is sensing another collapse of the government in the judiciary-executive quarrel — especially given the way the military has become involved because of the memogate affair — and will give no quarter. The bottom line is that when he appears before the Supreme Court on January 19, the prime minister will have to be flexible.

A fiery defiant speech will not do and will only raise tensions and exacerbate the current situation. He will have to buy time to reconsider the issue of writing a letter to Switzerland. His coalition partners have stood by him on the resolution about the sovereignty of the parliament but may bolt when it comes to standing by his side at the Court. There were rumours, though denied by official quarters, that the government is discussing the possibility of Mr Gilani resigning and letting the National Assembly elect another prime minister. There is an opinion within the PPP which says that the government should write the letter to the Swiss government. If this prevails, then one could see the prime minister submitting an unconditional apology before the court and pledging to write the letter. In the current situation, and with the prime minister more than having made his point in recent days vis-a-vis the memo issue, this may be the advisable option.

As for the opposition, it has stiffened its stance after seeing which way the wind is blowing. Led by the PML-N, it may not be flexible on the October 2012 date for the next election. It may want the Gilani government to go home and President Zardari to quit and let the country be run by a caretaker set-up to hold elections as soon as possible under a reformed Election Commission. This only reinforces the suggestion that the prime minister should agree to write the letter and then engage in talks with the opposition about the next elections. The opposition will come to heel once the threat of the disqualification of the current prime minister — or the next one — is removed.