A321 crash points to bigger problems

A321 crash points to bigger problems 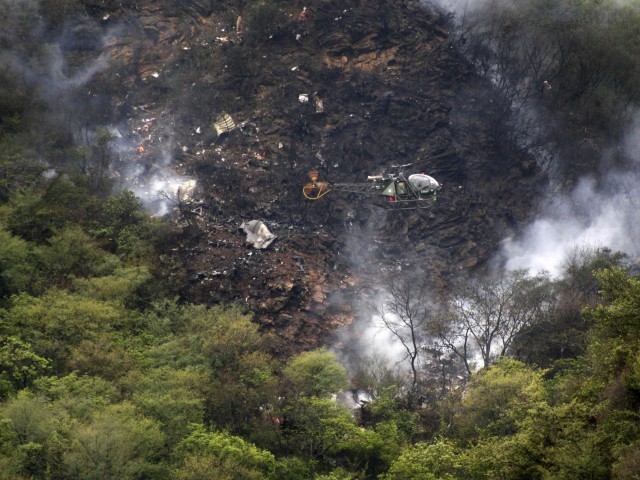 The Airblue A321 which crashed at Islamabad had a multiple crew, because the passenger jet was to fly from Islamabad to Manchester via Istanbul. The pilot-in-command Capt Pervaiz Iqbal Chaudhry, 62, had joined the airline after his retirement from PIA, following the extension in age utilisation granted by the Civil Aviation Authority (CAA) to allow airlines to utilise pilots in case of shortages, subject to medical fitness.

The Airblue aircraft, with 152 passengers and crew onboard, was cleared to land at Islamabad airport’s Runway 30. It was drizzling, with low clouds, however the visibility was over 3,500 metres with clear visual ground contact of over 1,000 feet above ground at the airport, but the wind was reported high.

Three aircraft, including the ill-fated A321, were inbound for Islamabad. Two PIA flights were diverted, but the A321 made a ‘Missed Approach’ at Runway 30, which means instead of deciding against landing at the airport, the pilot executes a ‘Go Around’, which is similar to takeoff with the same high engine power and flaps selection. The procedure for a ‘Missed Approach’ at Runway 30 is to climb straight out and turn, heading 240 at 2.5 nautical miles on the DME with further climb to 9,000 feet.

In this case, for unknown reasons the pilot did not make the mandatory turn and instead continued to fly straight out and hit the Margalla Hills adjacent to Sector F6/1 which is located over six nautical miles from Runway 30, where the ‘Missed Approach’ procedure was made. The A320 FMC system requires the pilot to give a command to the computer to execute a ‘Go Around’, failing which the aircraft will proceed on the last heading selected.

A320 is a short to medium range commercial aircraft manufactured by Airbus. It is equipped with digital ‘FLY BY WIRE’ flight control systems, through use of electronic signals instead of mechanical pulleys and hydraulic systems. This ‘Fly by Wire’ A321 was computer-controlled, with an inbuilt flight envelope protection, making it virtually impossible to exceed certain flight parametres, such as G limits, maximum and minimum operating speeds and angle of attack limits. It has a fully integrated EFIS colour display and innovative side stick controllers instead of conventional control columns.

The A320 family includes A318, A319, A320, A321 as well as ACJ business jet. The Airblue A320 fleet was acquired on a Dry Lease with option to purchase. However, it has been learnt that the airline started having financial problems and was unable to exercise the purchase option. As per contractual obligation Airblue was required to return the aircraft in the condition that they were delivered to it by the leasing company, which Airblue was unable to do. In the meantime the airline had been operating four out of its fleet of six A320 family aircraft. Investigations reveal that due to financial constraints the private airline was cannibalising two of the grounded aircraft for spare parts to keep the other four flying.

This reflects poorly on the CAA, which is supposed to regulate airline operators to ensure maximum safety through strict regulatory supervision of its maintenance records.

The CAA not only regulates airlines but also owns and operates the airports and navigation facilities provided in the country’s airspace. There is a conflict of interest because the CAA is also entrusted with the task of accident investigation, which explains why no investigation report has ever been authenticated internationally, nor has been made public. The matters have been made worse by irregular appointments within the CAA on political pressures or from the air force and military aviation, who neither have the requisite commercial aviation experience, nor the qualifications on type of aircraft in use by commercial airlines. Reports also reveal that corruption within the CAA bureaucracy has led to compromising on flight safety.

Investigations will also track medical records of the captain and his two co-pilots. Their recent flying experience and whether they were meeting the minimum necessary rest requirements prior to operating the flight. There are also restrictions on weekly and monthly flight hours, which airlines and their pilots are required to strictly abide by.

Investigations conducted by this scribe reveal that Capt Pervaiz Iqbal Chaudhry had been grounded about two months back and was admitted to the Aga Khan Hospital. He had uncontrollable diabetes, hypertension and cardiac problems. He was a very religious man and it could be possible that he did not rest well before the flight because of Shab-e-Barat.

Powerful pilot pressure groups enjoying strong political patronage have successfully got the age of utilisation extended beyond 60 years. Recent political appointments in the CAA and PIA have compromised on strict regulatory controls that are required for commercial aviation. It is these compromises and political appointments in the CAA that led to censure and partial banning of aircraft registered in Pakistan from operating into European airspace.

The other contradiction is that Flight Standards Division of the CAA is monopolised by pilots on the payroll of PIA, which results in conflict of interest. This pilot utilisation extension was first extended to 62 years on grounds of shortage of experienced pilots, who already possess the pilot ratings on the type of aircraft they fly. Our mole reports that this problem started when PIA inducted Boeing 777 into its fleet and a particular group of pilots who were flying A310s wanted to be promoted to Boeing 777 instead of on the basis of seniority. The pilot promotion plan was always based on seniority and this would have resulted in the senior-most flying Boeing 747 to be promoted. The former managing director, Chaudhry Ahmed Saeed, was instrumental in accommodating his blue-eyed boys, which led to a shortage on Boeing 747. The ministry of defence was then instrumental to extend the age of utilisation to 62 years, which has now been extended to 65 years.

Unfortunately the quality of medical surveillance available in Pakistan and the fact that properly equipped medical centres with best qualified medical specialists are not available in plenty across the country are ground realities which were ignored and extensions in age utilisation was misused without any regulatory controls. This resulted in overage pilots with existing medical problems to get permission to fly passenger commercial aircraft.

Capt Iqbal Pervaiz Chaudhry had a medical history and yet was granted permission to fly a new aircraft, which he had never flown in his career before, in spite of the fact that age adversely affects reflex action that are required in emergencies, where swift pilot remedial action can avert an accident or lead to an accident.

History of A320 crash

The first crash of an A320 had occurred on June 26, 1988 when an Air France A320 crashed during an air show in Habsheim, France, killing all three people onboard. The crash was blamed on pilot error by Air France, but investigations conducted by Switzerland’s Forensic Evidence and Criminology determined that the crashed plane’s Flight Data Recorder had been substituted. This made the entire investigations controversial. This aircraft had also crashed while executing a ‘Go Around’.