The death toll of those killed in floods in Khyber-P­akhtun­kh­wa rose to 106 on Thursd­ay.
By Iftikhar Firdous / Express
Published: July 29, 2010
Tweet Email 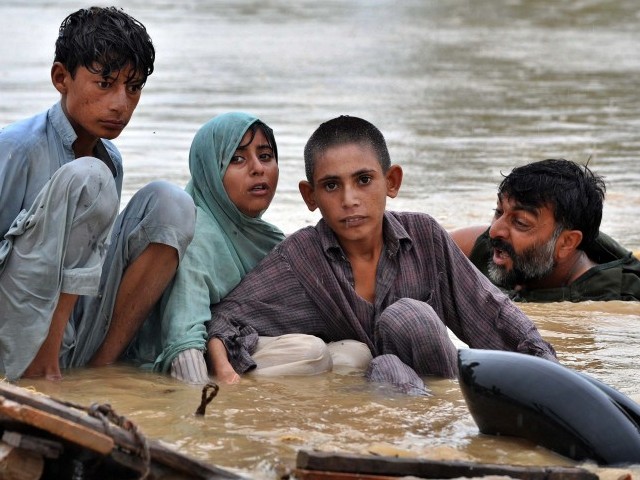 Local residents scramble to safety in a flood-hit area of Nowshera on July 29, 2010. PHOTO: AFP

The death toll of those killed in floods in Khyber-Pakhtunkhwa rose to 113 on Thursday.

Senior Khyber-Pakhtunkhwa minister Basheer Bilour said that  over 50 bridges have been swept away.

Fifiteen bridges, 300 shops, more than 80 houses and a hotel were washed away in floods in Swat and Bahrain.

Twenty-six people have died due to rains and floods in Shangla. Lightening struck and killed nine people in Dhairy, while eight drowned in floods in the Kohistan area.

Six people were swept away in floods in Lower Dir, while two children died in Marzoi area of Shabqadar when the roof of a house caved in.

Four children, two each in Bannu and Akora Khatak refugee camp were swept away by heavy floods.

People in the affected areas are reportedly running out of food.

The DPO office and Police Lines were also swept away in flood in Nowshera.

People who managed to get to the rooftops await immediate help. It is feared that the rising water level will sweep them away.

The Pakistan army has set up a flood monitoring cell in the Corps Headquarters, Rawalpindi, where the latest flood situation is being monitored and coordination is being carried out with the civil administration.

ISPR said that all available troops of the army have been mobilised since Wednesday to carry out rescue and relief activities in concert with the civil administration.

Khyber-Pukhtunkhwa Information Minister, Mian Iftikhar has appealed the federal and provincial governments to provide support for the people stranded in floods.

Addressing a press conference in Peshawar, Mian iftikhar said that emergency has been declared in the province and all government departments are busy in rescue efforts. He said that provincial government needs more resources to cope with this natural disaster.

He said that floods have destroyed the infrastructre and people in many areas are stranded. He said thousands of people have been affected through flood and many casualties have been reported.

Mian Iftikhar said that assembly session has been postponed and all legislators have been directed to help the people of their areas. He said AC-130 carrying boats will arrive in Peshawar which will be dispatched to affected areas for rescue operations.

At least 48 people were killed and 35 suffered injuries as floods triggered by torrential rain hit Khyber-Pakhtunkhwa (K-P) on Wednesday. The deluge felled several houses and buildings and disrupted the communication system.

Regi and Taj Abad – two villages located on the outskirts of Peshawar – were the worst affected areas where floodwater inundated more than 250 houses. At least six people were killed and the military was called out to help with relief activities.

In the Badhaber area, five people of the same family were killed as the roof of their house caved in following heavy rain. Traffic on the main GT Road in Badhaber remained blocked for hours.

“Schools have been vacated to house the people displaced by rains. Initial survey of the damages has been sent to the chief minister of K-P,” Sairaj Ahmed, the district coordination officer (DCO) of Peshawar said.

Standing crops and cattle also suffered the brunt of the torrents as people left behind their belongings to evacuate to safer zones. Charsadda Road, the main road linking Peshawar to other districts, was closed for all sorts of traffic as the water level in the Shah Aalam River increased.

Several people were left stranded without any proper facilities and more than 200 houses were severely damaged in Charsadda as water levels rose and made way towards the city. Rising levels of water were noted at Sardaryad, Khayali and Jindi rivers.

28 people were killed in Swat, Shangla and Upper Dir districts as a result of the heavy downpour, according to official sources. The Inter-Services Public Relations (ISPR) formed a control room to help those affected.

Landslides in Alpuri, Bisham and Pooran halted inter-district communication, whereas the collapse of several bridges in the Malakand Division has worsened the situation. According to the irrigation department the flow of water is more than 8,000 cusecs and is expected to rise. The Malakand Levies, irrigation department and the military are on red alert, said DCO Malakand.

The main transmission gas pipeline in Lakki Marwat exploded as water currents lashed against it because of which the supply of gas to the southern districts still remains suspended. The situation in Tank, Chitral and Lower Dir was also turbulent.

The district administration in Tank said that over 1,000 houses were damaged. The City and Gomal police stations had to be evacuated by the security personnel and the official records as well as weapons had to be shifted to another location.

Two people were washed away by flood waters in Khaal, Lower Dir and a flood warning has been issued in the area as water levels are rising in Pangora River.  The Lowary tunnel linking Chitral to the rest of the country was also closed down as water made its way through the tunnel.