A Karach­i-based pilot feels that one of the factor­s behind the crash could be the shorta­ge of ILS.
By Aisha Iqbal
Published: July 29, 2010
Tweet Email 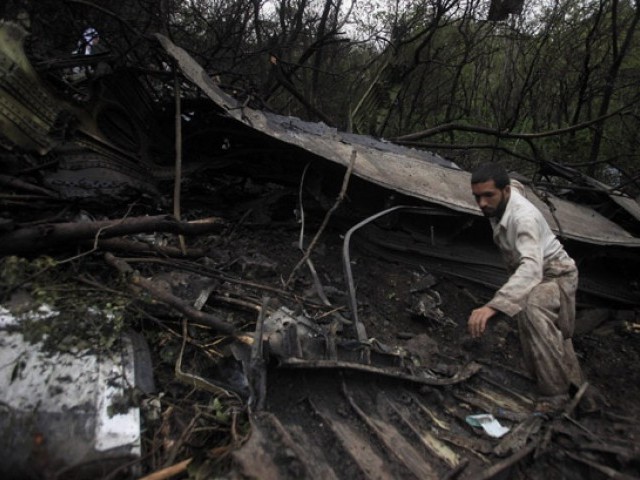 A rescue worker searches the wreckage of an Airblue passenger plane. PHOTO: REUTERS

KARACHI: A Karachi-based pilot with 33 years of experience feels that one of the factors behind the crash could be the shortage of Instrument Landing Systems (ILS).

“A runway has two ends and you can either land on it from the east or the west, depending on the direction of the wind,” he explained, adding that the wind should preferably be on the front side of the plane.  An ILS is a device that helps a pilot land. “It makes it much easier, and safer, for the pilot to land,” he said.

According to him, in Pakistan airports have the ILS installed on just one end of the runway. “This means that if a pilot is landing from the other end, it won’t get the aid of the ILS.”

In the case of Airblue’s Airbus A321, the pilot was trying to land from the end of the runway which did not have the ILS.

“In Peshawar they don’t even have an ILS because they say the terrain doesn’t require one,” the pilot commented, adding that he could not fathom why the airport authorities simply did not ensure that the instrument was installed on both ends of the runways. “It is a matter of flight safety.”

Islamabad does have tricky terrain but as the pilot put it, “there are degrees of difficulty. Compared to Skardu, landing in Islamabad is not difficult but compared to Lahore where there are no mountains, it is hard.”

He feels that a number of issues together, including bad weather, were behind the plane crash.

He admitted that nothing could be said for certain yet and it would probably take a very long time to figure out what happened.

However, the plane crash is an incident that should be used to highlight the lack of the ILS in the country’s airports.

The Instrument Landing System adds glide-slope, or elevation information. Commonly called the ILS, it is, in every sense, a precision approach system and with the most sophisticated equipment it can guide you right down to the runway-zero Decision-Height and zero visibility (Flight Simulator Navigation website).

Usually aircraft land on auto-pilot mode but weather conditions could force the pilot to apply manual methods for landing, a senior PIA captain told The Express Tribune. At the Benazir Bhutto Shaheed International Airport, if an aircraft, while taxiing for takeoff, does not receive clearance from the control tower then the aircraft approaching to land is asked CAA was contacted about the Airblue flight, they said it had obtained clearance.

According to aviation law, each airline has to get a weather report an hour before it takes off. “The flight pilot is given an Actual Weather Report (AWR), including the visibility [description],” said a senior cockpit crewmember. For instance, at the time of departure, the visibility report is given to the pilot and is an average of 800 metres. “If the visibility is less than 800 meters, the flight is delayed,” said an official.(with additional reporting by shahzad jillani)