Exports likely to fall $3b from last year’s level

Exports likely to fall $3b from last year’s level 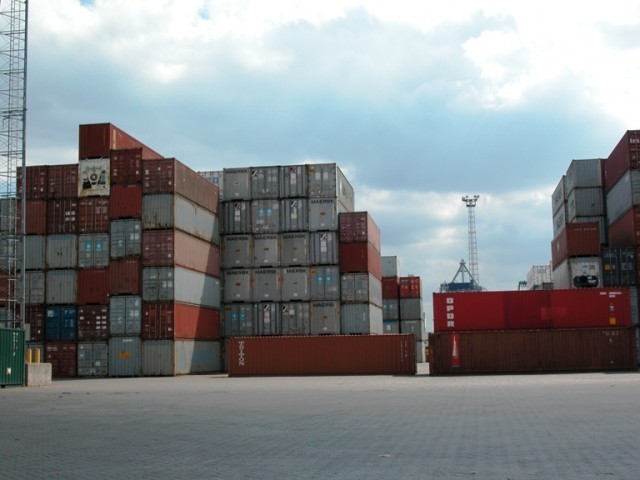 " Exporters got a lukewarm response at the world’s largest textile exhibition recently because of underperforming industries due to gas cut," Former president of the Karachi Chamber of Commerce and Industry Anjum Nisar.

KARACHI: The export target is under threat this year as shipments are likely to be $3 billion less than last year’s level of $25 billion because of energy shortages and resultant industry and labour inefficiency, default on loan repayments and India’s edge in the global market following around 16 per cent depreciation of its currency.

A somewhat similar scenario was portrayed by Trade Development Authority of Pakistan Chief Executive Tariq Puri last week when he said that despite performing well in first five months of the current fiscal year, exports might fall in coming months, the reasons being energy shortages and a sharp decline in cotton prices in the international market.

“Compared to last year, average exports have gone below $2 billion this year and going by the average total exports will be around $22 billion keeping in view a host of impediments faced by the industry,” said Anjum Nisar, former president of the Karachi Chamber of Commerce and Industry. Imports, however, are expected to increase to $45 billion by the end of the year in June, leaving a trade deficit of $23 billion.

Nisar said Pakistani exporters got a lukewarm response at the world’s largest textile exhibition – Heimtextil – in Germany recently apparently because of underperforming industries following suspension of gas supply in Punjab and power outages. “Some industrialists have even defaulted on loan repayments in recent months after closure of manufacturing units or running sharply below capacity due to energy problems.”

Besides the energy crisis, economic weakness in the European Union and the United States – the major export markets of Pakistan – has slowed down demand from the importers.

Nisar said the hefty depreciation of the Indian rupee had provided an edge to Indian exporters in the international market while “power outages and gas suspension have crimped our industries and affected efficiency of workers.”

The government, on its part, says it is working to cope with the energy crisis which will end in a few years. In an effort to give a boost to trade, it has signed free trade agreements with China and Malaysia and is expected to ink a preferential trade agreement with Indonesia this week.

“The government should pay more attention to reaching trade agreements with developed countries which have expertise in technology and engineering goods and can provide heavy machinery to modernise our industries,” said Khurram Schehzad, Research Head of InvestCap brokerage house. He particularly mentioned the agricultural sector which should be equipped with state-of-the-art technology and training of farmers to prop up the economy.

He pointed out that exports of the country mainly depended on outside factors, like the increase in cotton prices in the world market last year, and called for increasing competitiveness and going for diversification of exports, which mainly rely on textile. Industries like information technology, pharmaceutical products and leather goods have a potential to make great strides in the international market.

There has also been stress on lobbying and better and aggressive marketing of products in the world market to improve country’s exports. “If we improve quality of our products and export orders are met on time, then more buyers will come and rely on our products,” he said.