One couple - Aisha and Mohamm­ad - on the AirBlu­e flight were on their way to attend a funera­l in Islama­bad and had...
By Fawad Shah / Neha Ansari / Hira Siddiqui
Published: July 29, 2010
Tweet Email 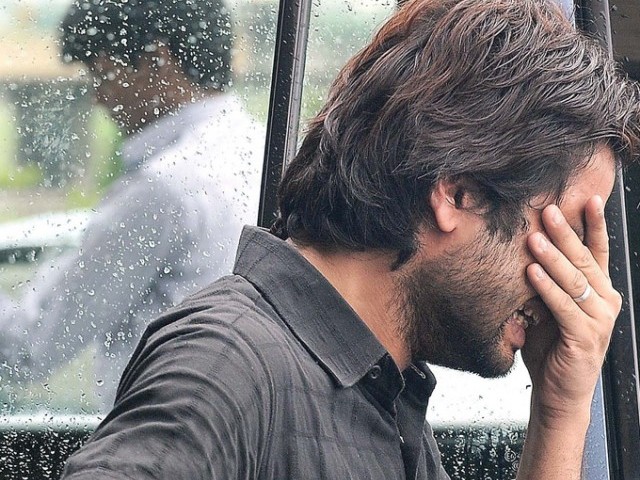 A relative of one of the victims at the Karachi airport. A flight was arranged for them to Islamabad late Wednesday. PHOTO: AFP

KRAKOW: One couple – Aisha and Mohammad – on the AirBlue flight were on their way to attend a funeral in Islamabad and had left their children with family in Karachi.

“What will I tell their children now,” cried Aisha’s brother Akhtar while waiting at the airport for news.

Wednesday’s plane crash sent shock waves through Karachi. It seemed as if everyone knew by at least six degrees of separation one person affected by the tragedy. The pain of the relatives stuck in Karachi was doubled by the lack of timely information and their inability to get to Islamabad quick enough.

Syed Shan-e-Hussain Naqvi, who was supposed to be on the flight, told The Express Tribune that a distant cousin and fellow youth parliamentarian Rabab Naqvi was a straight-A student.

“I was so shocked. Rabab’s father called me up and started crying. ‘My daughter is gone’,” he said.

Hussain said she was one of the best delegates in the youth parliament and was an all-rounder. “In the last session, she led a no-confidence motion against the youth parliament’s prime minister. The government changed and there had to be a new premier.”

That new prime minister was Hassan Javed Khan. He was on the plane and was to join Oxford University this fall.

Rabab’s father Muhammad Murtaza had spent time with her the evening before. “She was really happy last night,” he said. “She kept on reading till late at night and came to me and asked to pray for her. I want to go to Islamabad and see my daughter or her body myself.”

Bagwan Das, the first cousin of Prem Chand, who hailed from Sukkur told The Express Tribune that he had dropped his cousin at the airport at 7 am. “I had just reached home when we saw the news on the TV and rushed back to the airport.”

According to Bagwan Das he was the only educated person among their group of friends. “We could not sleep all the night, Chand was telling me stories of Islamabad and parliament and we went to the seashore to enjoy the weather,” he said.

Ten members of the Youth Parliament were supposed to board the flight, but only six did. Syed Shan-e-Hussain Naqvi had a confirmed seat on that plane, but decided in the morning not to go as he had to take care of some important meetings. “My parents did not even know that I had not taken the flight because I spent the night at my friend’s house,” he said. “I called to tell my parents that I didn’t go, they could not believe it. My mother just couldn’t stop crying.”

Hussain was attending phone calls since Wednesday morning as his name was on the flight passenger list released to the media. “People are congratulating me on being alive. But my friends are dead. I don’t know whether to be happy or sad.”

Former federal sports minister Mir Mehran Khan Bijrani and his son Salman had confirmed seats but got late and missed the flight. Mehran’s son Irfan said that when they reached the airport, the flight had just taken off. So they took the next flight to Lahore, instead.

Saeed Minhas, was one of the 10 people who had reserved a ticket but didn’t go. The Gulshan-e-Iqbal resident said that the family have arranged for sadaqa and khairat in his name. “My wife called me crying,” he said. “I asked why, and she said the plane had crashed.”

Ace footballer was going to Berkeley