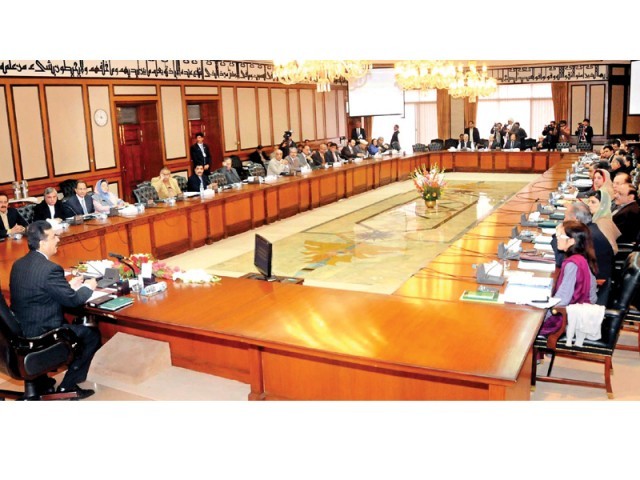 PM Gilani chairs the meeting of the Federal Cabinet held at the PM Secretariat. PHOTO: PPI

ISLAMABAD: Amid a flurry of heated activities taking place in the wake of the Supreme Court decision on the National Reconciliation Ordinance (NRO), the federal cabinet on Wednesday threw its weight behind the president and prime minister — deciding to take up the issue of the implementation with elected representatives of the country.

“The government has decided to avail one of the options given by the SC of approaching the people or Parliament over the issue… the matter will be discussed in today’s [Thursday’s] session of the National Assembly,” Information Minister Dr Firdous Ashiq Awan told reporters during a briefing after the cabinet meeting.

“The cabinet members supported a resolution moved by Interior Minister Rehman Malik to express confidence in the leadership of Prime Minister Yousaf Raza Gilani,” stated the information minister — nullifying rumours regarding an alleged difference of opinion in the meeting.

“The coalition partners have assured their support and today’s session [of the NA] has been convened in consultation with the allied parties,” she said.

Awan said that the Pakistan Peoples Party (PPP) believed in the supremacy of parliament and clarified that the National Assembly session would not result in confrontation, and instead would add institutional harmony.

Responding to a question regarding discussion over the apex court’s decision in the cabinet, the minister said that the matter was not discussed since the cabinet was not the appropriate forum.

“Though some people wanted to dislodge the government, the discussion in parliament would find a way out of the problem since the government does not want collision of national institutions,” she said, adding all the rumours would die down soon.

Responding to another query, the information minister said that the PPP leadership has sacrificed their lives for the cause of democracy and does not need or want to gain political mileage from being “political martyrs”.

When asked about the government’s strategy before the Supreme Court, she said that the attorney general has been assigned to draft a reply on behalf of the government in the NRO implementation case.

The finance secretary gave a detailed presentation on the consumer price index of the country and Pakistan’s exports and imports during the last one year.

He informed the cabinet that since May 2010, Pakistan had not availed the IMF Programme and had successfully managed its own finance.

In addition, the cabinet was informed that last year remittances stood at $11.7 billion. It was further revealed, during the first six month of the current financial year, Pakistan received US $ 6.3 billion.

Chinese troupe gets a glimpse of Pakistan’s rich culture