Abu Bakker, a Chines­e Muslim freed from Guanta­namo and grante­d asylum in Albani­a, has no hopes of return­ing to China.
By AFP
Published: January 10, 2012
Tweet Email 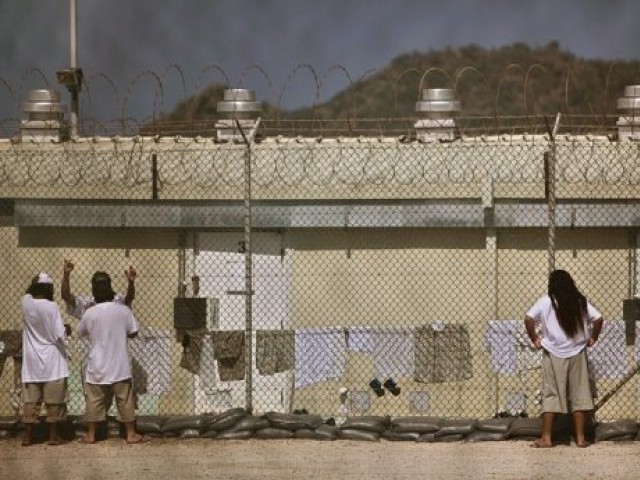 Abu Bakker, a Chinese Muslim freed from Guantanamo and granted asylum in Albania, has no hopes of returning to China. PHOTO: AFP

TIRANA: Abu Bakker Qassim, a Chinese Muslim freed from Guantanamo and granted asylum in Albania, now makes pizzas in Tirana as he looks forward to being a father again, but with no hope of returning to China.

“I started a new life in Albania, I cannot return to China and the Chinese authorities will not allow my family to leave the country and come to Albania,” Qassim said.

He works in a small pizzeria across the street from a technical school, something very different from the job in a leather factory that he held in China.

Every afternoon he comes in at 4:00 pm and works until closing time.

“I had to learn how to make pizzas in Tirana, which was not easy because it’s not exactly a speciality of my country,” he told AFP, flashing a smile.

Although Albania pays his rent and an additional 300 euros ($382) a month allowance, Qassim said he had to work to earn enough money to support his family.

“The competition is fierce and I try to make my own recipes with ingredients that will please my clients who are mostly young students,” he said.

Qassim, 43, is one of five Chinese ethnic Uighurs resettled in Albania after being released from the US detention camp in Cuba in 2006.

He was among several Uighurs captured in Afghanistan when the United States launched its “war on terror” after the September 11, 2001 attacks.

He says he went to Afghanistan to escape the persecution of Uighurs in Xinjiang province by Chinese authorities.

China accuses him of having links with the East Turkestan Islamic Movement (ETIM) fighting to re-establish the independent state of East Turkestan in Xinjiang since the province became an autonomous region in 1955.

Qassim spent four and a half years in Guantanamo but was finally declared innocent by a US federal court and sent to Albania.

“(US President Barack) Obama understood that Guantanamo was a huge mistake which should be corrected but China still considers us terrorists,” Qassim said.

The United States had asked several countries to take in the Uighurs but only Albania accepted in the face of  from China.

“For years I hoped in vain that either the United States or the United Nations or Albania would help me join my (first) wife and three children whom I’ve not seen for 12 years,” Qassim said, speaking in Albanian.

After much agonising he remarried but keeps in regular contact with his first wife and children in China through the Internet.

“I decided to remarry. My wife is pregnant and in two weeks we will have a baby girl.”

His second wife is also Uighur. She was living with her family in another European country, that Qassim will not name for security reasons, and has since obtained political asylum in Albania.

“We will call the baby Zejnep (desert flower) she will be the crowning jewel in this new life in Albania,” Qassim said.

Faced with the same problems as Qassim, two of his four fellow Uighur ex-Guantanamo detainees have brought Uighur women to Tirana to remarry.

A third is hoping to find an Albanian wife while the fourth has asked for political asylum in Sweden.

“In Guantanamo we kept our beards, because it was part of our customs but in Tirana I shaved it off because there are still people … who think that there is a terrorist lurking behind every beard,” Qassim said.

“I was declared innocent. I was never a member of a terrorist group .. My greatest desire is the independence of my province and to return to my country when it will be independent from China,” he insisted.

His time in Guantanamo has left deep scars. He still has nightmares and hears the screams of fellow prisoners.

“In Guantanamo the law did not exist and people were only numbers … I should not complain about my new life in Albania,” he said.