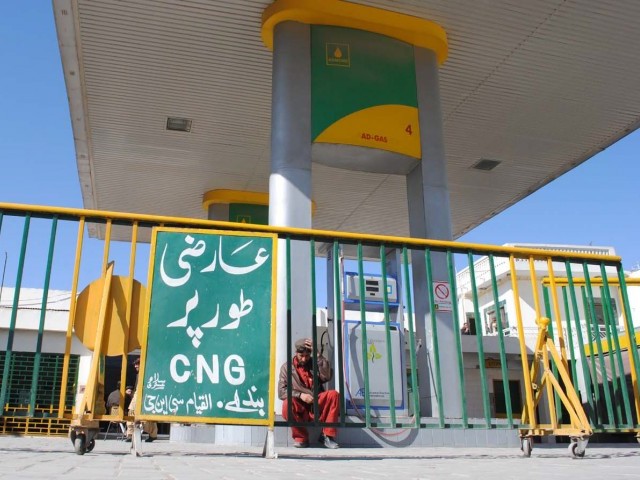 A CNG station is shut in Quetta on Monday, January 9, as the province waits for gas supply to resume four days after a pipeline in Dera Bugti was attacked. PHOTO: NNI

QUETTA: As Balochistan went without gas for the fourth day on Monday, agitated Quetta residents took to the streets and blocked roads in protest.

Protesters marched throughout the city, including main areas such as Saryab Raod, Alamo Chowk, Killi Shabo and Smungali Road, and condemn the inefficiency of the Sui Southern Gas Company which has been unable to repair an 18-inch pipeline in Dera Bugti that was attacked twice last week.

Enraged protesters in Saryab, the most populous part of the city, stopped a passenger train enroute to Karachi from Quetta for an hour and staged a sit-in on the railway track. Noisy protesters also staged a demonstration outside SSGC’s regional office in Quetta.

Many protesters were of the view that the SSGC takes hours to repair an attacked gas pipeline that supplies Punjab and northern Pakistan.

Zubair Ahmed, a young Quetta resident, paused only long enough from chanting anti-SSGC slogans to allege the company’s management of deliberately delaying resumption of gas supply. “This is the third winter that we are deprived of gas, particularly in the month of January,” he said. “Temperatures in Quetta and adjacent areas have dropped beyond freezing point and gas is an essential need.”

The SSGC spokesperson, however, claimed that gas supply to Quetta and other townships was restored on Sunday night. When it was pointed out to him that there was no gas on Monday, he said that the repairs were complete but it may take a few hours to completely restore supply.

Traders from the Anujman-i-Tajiran Balochistan held a protest demonstration outside the Quetta Press Club. They warned that they will intensify their protest and block the National Highway as well as observe a shutter-down strike in Quetta if gas supply was not restored within three days.

In areas where gas was being supplied, the pressure was too low for use. “I haven’t eaten properly cooked food in five days. We are using firewood to cook,” said Adeel, a resident of the Railway Colony.