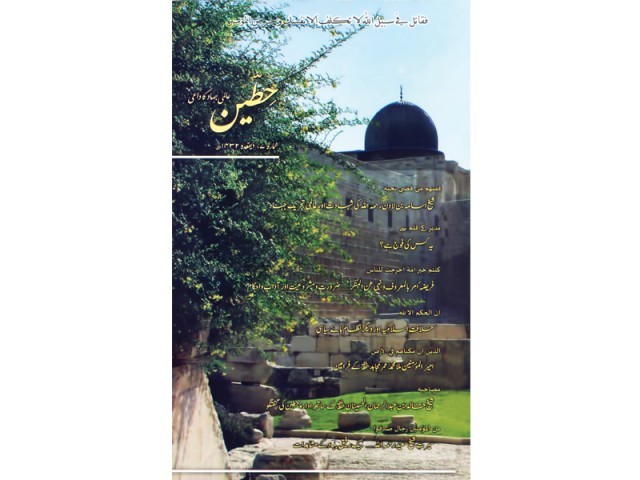 Al Qaeda continues to preach jihad through an Urdu monthly magazine, The Express Tribune has learnt. The 200-page magazine, Hiteen, is delivered by post.

Hiteen, the battlefield where Sultan Salahuddin Ayubi defeated the Crusaders, was started in June 2011, a month after Osama Bin Laden’s death. The magazine has stories which preach jihad and praise Bin Laden.

Hiteen is being sent to not only the Deobandis but also to Ahle Hadith and Barelvis to convert them to Al Qaeda’s point of view. The seventh edition which was sent out last month, opens with an essay, Matyrdom of Sheikh Osama bin Laden and the International Jihad Movement.

The magazine has the ‘sayings’ of Mullah Omer and some Al Qaeda leaders. There is also an interview with Sheikh Khalid Bin Abdul Rehman Al Husnain. Husnain, once part of Kuwait’s Ministry of Islamic Affairs, has now joined Al Qaeda. There is a fatwa by Muhammad Waliullah Hussain of the Jamiatul Uloomul Islami, which declares that there is no bar on Muslims looting goods from Nato containers.

Hiteen does not carry the name of the editor, the only way to send feedback is through two email addresses.

An editorial says that it is not true that the mission of the ‘mujahideen’ has been damaged with Bin Laden’s death. The mujahidden are still fighting with their full strength. It advises readers not to pay attention to the ‘false reports about mujahidden from the hyprocitical media’ and to continue the struggle. The fight, it says, will continue till the US is removed from Muslim countries and an Islamic Caliphate is established.

An anonymous essay speaks of the need for another Bin Laden who would fight non-Muslims and defend the Muslims. The magazine thanks the many wings of Al Qaeda all over the world.

A police officer of the Counter Terrorism Department, speaking on the condition of anonymity, said they had knowledge of the magazine and that copies of it were in their record.

He maintained that they would soon discover who was responsible for publishing and circulating Hiteen.

Taxidermy: Ostrich parts and a donkey in love