Some 8-10 are yet in their custod­y, says Bajaur admini­strati­on offici­al Islam Zeb.
By AFP
Published: January 5, 2012
Tweet Email 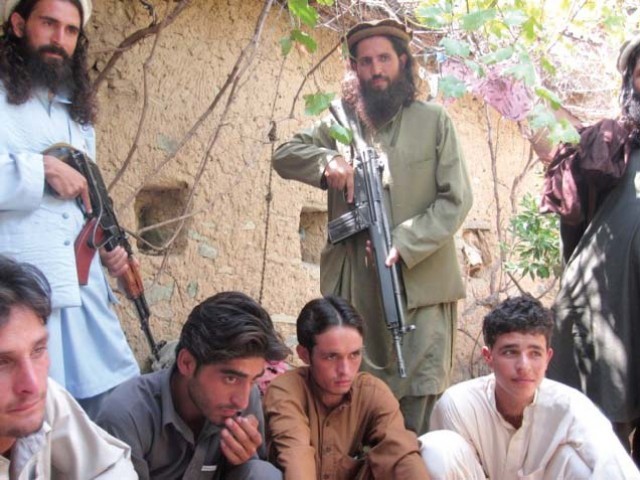 KHAR: Pakistani Taliban on Thursday released 17 people after over three months of captivity who mistakenly crossed the border from the country’s lawless northwest into Afghanistan, officials said.

More than 30 young people aged between 20 and 30 were kidnapped from Pakistan’s Bajaur tribal region during celebrations marking the Eid holidays in September 2011.

“Today Taliban has released 17 of them, some 8-10 are yet in their custody,” Bajaur administration official Islam Zeb told AFP.

Zeb at the time said the boys had been abducted by a militant group allied with Taliban commander Maulvi Faqir Muhammad, who led local insurgents but is believed to have fled to Afghanistan in 2010.

“They have ben freed unconditionally,” he added.

Earlier in October 2011, two of the boys had managed to escape Taliban’s custody and return home more than 40 days after being abducted, local sources had said.

Amanullah and Abdullah, belonging to Mohmand tehsil of Bajaur Agency, had managed to escape and reach home.

The Taliban had demanded the release of all their comrades imprisoned in Pakistan. The kidnappers, who are keeping the boys captive in Afghanistan’s eastern Kunar province, also asked Bajaur tribesmen to disband all anti-Taliban private militias and end support for the government in return for their release.

Several jirgas had been convened by tribal elders for the safe recovery of the boys but had not succeeded so far.

Afghanistan shares a disputed and unmarked 2,400-kilometre (1,500-mile) border with Pakistan, and Taliban and other al Qaeda-linked militants have carved out strongholds on either side.

For years the neighbours have traded accusations over the Taliban and al Qaeda-linked militants embedded in both countries, who criss-cross the porous, unmarked border and fight security forces from both governments.

Bajaur was the scene of a major anti-militant operation in August 2008 and in February 2009 and the military said the area had been secured.