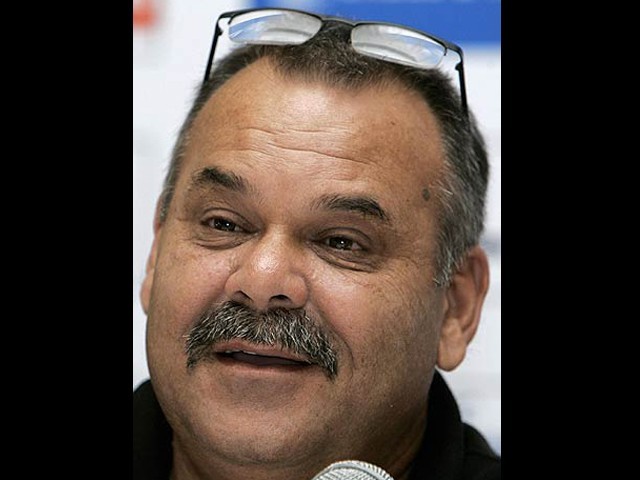 We are in process of finalising appointment and in this regard are in discussions with Whatmore: PCB official. PHOTO: CRICINFO

Dav Whatmore, who has been touted as the front-runner to become Pakistan’s next head coach, has resigned from his coaching job at the Indian Premier League franchise Kolkata Knight Riders, according to ESPNcricinfo.

Whatmore, who was serving as head coach with the Knight Riders, cited his inability to discharge his duties with the team as he wanted to pursue an international role.

The Pakistan Cricket Board (PCB) has invited the former Sri Lanka and Bangladesh coach to the country in the second week of January to discuss his appointment, and the Knight Riders expressed their support of his desire to coach a national team again.

“We have been most supportive of Whatmore’s keen interest in pursuing an international coaching role and wish him the very best,” said chief executive of the Knight Riders Venky Mysore. “His decision to resign is to ensure that Knight Riders are able to plan for the transition and we thank him for that.”

Whatmore’s tenure with the Knight Riders lasted two seasons. In his first year, they finished sixth out of eight teams but a revamped side under captain Gautam Gambhir reached the knockouts in 2011.

Meanwhile, Pakistan have been without a full time coach since Waqar Younis left the post in September, with Mohsin Khan serving in the position in an interim capacity. No final decision has been taken by the PCB regarding Whatmore’s appointment, although the board’s Chief Operating Officer Subhan Ahmed has previously confirmed that discussions were taking place between the two parties on the matter.

“We are in the process of finalising the appointment of head coach and in this regard are in discussions with Whatmore,” said Ahmed.