Sadly, Katy and I are ending our marria­ge. I'll always adore her and I know we'll remain friend­s, says Brand.
By Reuters
Published: December 31, 2011
Tweet Email 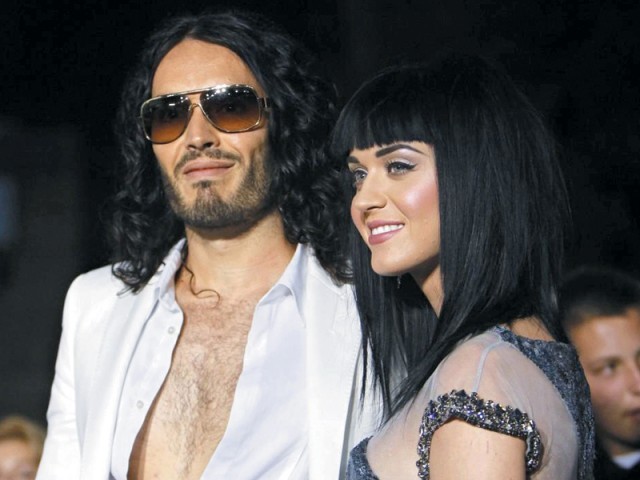 LOS ANGELES: British comedian and actor Russell Brand called it quits on his 14-month marriage to “Teenage Dream” singer Katy Perry on Friday, filing for divorce on the grounds of irreconcilable differences.

The irreverent, former drug addict and the perky Christian-raised singer of international hits like “California Gurls” and “Firework” seemed an unlikely match, but they quickly became one of the most high-profile couples in the entertainment industry.

In recent weeks however, celebrity media reported that their marriage was in trouble.

They spent the Christmas holidays apart, with Brand being photographed in England, and Perry spotted in Hawaii – both without their wedding rings.

“Sadly, Katy and I are ending our marriage. I’ll always adore her and I know we’ll remain friends,” Brand said in a statement on Friday, after filing divorce papers in Los Angeles Superior Court. No separation date was given.

Perry’s representatives did not return calls for comment on Friday.

Brand, who starred in the 2011 box-office flop “Arthur”, dismissed rumors earlier this month that the couple were planning to split.

“I am married to Katy perpetually. Until death do us part was the pledge. I am still alive,” the comedian told US talk show host Ellen DeGeneres in a Dec. 2 interview.

Perry, who first tried a career as a gospel music singer, transformed herself from what music critics thought might be a one hit wonder with the single “I Kissed a Girl” in 2008 to become one of the world’s biggest pop stars.

Her “California Dreams Tour 2011,” played up her carefully cultivated bubblegum pop image with sex appeal. But she told Reuters in an interview earlier this year she was able to stay away from the wild, party life with the help of honest people around her, including Brand, himself a recovering drug addict who is now clean and sober.

Brand rose quickly through the ranks of Hollywood.

His antics include being forced to resign as a BBC radio host in 2008 after making lewd, prank phone calls before appearing in break-out role as a music pop star in the film “Forgetting Sarah Marshall” and repeating the character for “Get Him to the Greek.”