It took just 12 days for nine women who could not even write to learn the basics of filmma­king and comput­er skills and...
By Samia Saleem
Published: July 27, 2010
Tweet Email 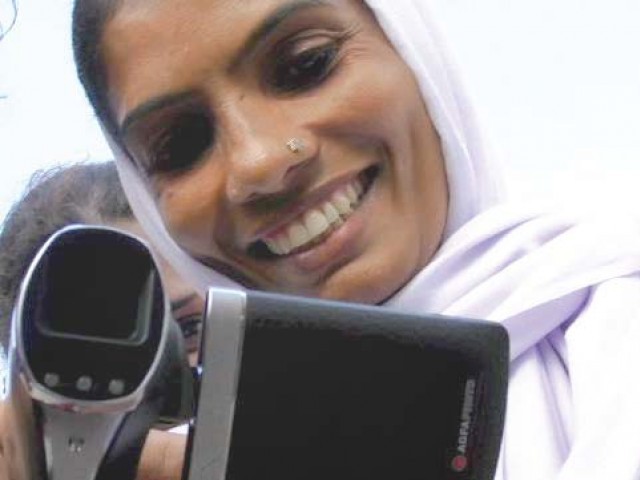 Unschooled victims of abuse complete a documentary on violence against women

KARACHI: It took just 12 days for nine women who could not even write to learn the basics of filmmaking and computer skills and complete a documentary on violence against women.

A training workshop called WISE was held by the Pakistan Institute of Labour Education and Research to help women overcome the abuse they have suffered and create awareness about violence against women by learning the technical and creative processes involved in filmmaking.

The nine women were all survivors of some kind of physical, mental or sexual abuse. They came from different parts of Karachi and other areas in Sindh, including Tando Adam, said the programme’s coordinator Saleha Atha.

“These women have come a long way in the 12 days of training,” said Danielle Spencer, project coordinator of WISE. She said the first two days were difficult since the women could not even write in Urdu, let alone make their way forward with the English alphabet. However they were an exceptionally smart group, Spencer said, adding that the women grasped the workings of the social media very quickly.

“I had experience in theatre, TV and social work as well and I wanted to combine the technical and the social cultural aspects,” she said. “I taught them physically and used symbols which they grasped immediately.”

According to Spencer, the participants were quite nervous and introverted when the programme started. “Some of them could not even make eye contact with me,” she said. By the last day of the workshop on Monday, however, the women were presenting their work and taking questions from an audience.

One of the participants, Shabana, agreed that training had boosted her confidence. “We all managed to make a documentary in which we have talked to women about their issues, we also talked to men about their views on violence against women and we interviewed experts to get their opinions,” she said. “And we did everything on our own from using the camera to selecting the issues and the interview questions.”

“We went where even the media has not gone,”  said another participant, Rehana. “We believe that our voice will be stronger now.”

The 10-minute documentary is called Half Face. It shows how women are treated by their husbands and other men in the community and how their rights are suppressed at their workplace and in their homes.

Spencer will carry out the same programme in other countries in South Asia including Indonesia, Thailand and Sri Lanka. “I was really afraid of coming to Pakistan,” she revealed. “But I feel that the security condition in Pakistan is immensely exaggerated. People here are very loving and warm and I would love to come back.”

The participants were given a USB stick with their documentary saved on it. They have been encouraged to create awareness in their communities about different issues faced by women. They were also given access to a camera and laptop so they can make more documentaries and films. Spencer said that she will be sending two more laptops and another camera to their villages so that the women can continue making their voices heard through social media.

Justice (retd) Majida Rizvi, who has long campaigned for women’s rights, said that it is up to women to change their battered states. “You should not differentiate between a male and female child, train your young male children to respect women and be fair with other women,” she said.

The documentaries will be broadcast on a special YouTube channel and shared globally through social media.