Kiran School gives children of Lyari a chance to advance

Kiran School gives children of Lyari a chance to advance 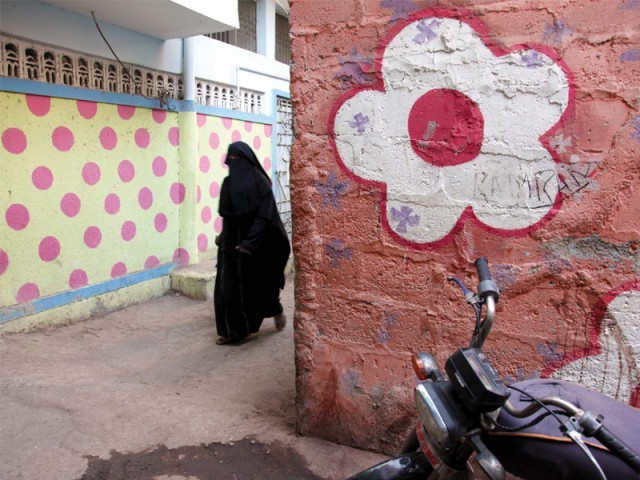 The Kiran School in Lyari admits toddlers and helps them secure scholarships as well as admissions to prestigious schools. So far, it has helped 93 children gain admission into various schools such as St Michaels, Happy Home, Habib Public, Head Start and Nasra Schools. PHOTO: EXPRESS/NEFER SEGHEL

An area notorious for gang violence, there is a street whose walls are lined with colourful paintings of flowers and butterflies. Here, the children converse fluently in English, have mashed potatoes for lunch and frolic about in an indoor playground.

This is the Kiran School. Underprivileged toddlers are admitted to the school, which then tries to help them gain scholarships as well as admission to prestigious educational institutions.

So far, it has prepared and sent off 93 children to St Michaels Convent, Happy Home, Habib Public, Head Start, DA, Nasra Schools and the Aga Khan Foundation. One such child is eight-year-old Hamza from the Baghdadi area who now studies at St Michaels Convent School. “No one in my family speaks English as well as me,” he beamed as he danced to Shakira’s ‘Waka Waka’. He was wearing a jersey of a football club and said that he enjoys playing the sport at his new school.

Samia Altaf, a third grader at Habib Girls School, used to roam barefoot in the streets. “I like to stay at home and read,” she said shyly.

“We behave and don’t fight with anyone,” said Aqsa. “We keep our streets clean and throw litter only in the dustbins.” An alumnus of the Kiran School, Mohammad Adil, sat beside Aqsa. “I love my new school. I have a lot of friends and go to the birthday parties that they throw. We have a huge playground and have a sports day too!” he quipped enthusiastically.

The Kiran School is the brainchild of Sabina Khatri. “My aim is to groom these kids so that they get a chance to study in good schools,” she said. “The children are very talented and full of life. I want them to have a chance to see the world outside Lyari.”

The older children come in for about a year while the younger ones stay at the school for up to two years. The education of each child costs between Rs75,000 to Rs100,000 per year. The donors are mostly Khatri’s friends and family.

Originally a fitness professional, Khatri took over the school when she saw that the funds for a school which her family supported went unchecked.

“I visited the school, and found it in shambles,” she said. “There were 200 children, from two to 16 years of age, who were all studying in one room.” That summer, Khatri adopted the school and relocated the children to government schools. She decided to convert the school into something like a Montessori, where the children could be trained and groomed. The first batch, which consisted of 20 children, was enrolled in July 2006.

Initially, the residents of Lyari thought that Khatri was launching an ‘Americanised’ school. “But they soon realised I was there to help them. The people of Lyari have been ill-treated for a long time,” she said. “They are willing to give away their lives for their leaders [politicians] but sadly their problems are always ignored by the same people.”

Khatri said that she had criteria for selecting her students. “Usually, I prefer first borns since young families are more willing to change their lifestyles. Also, the father should not be jobless.”

Khatri did not want the children to suffer from inferiority complexes when they returned home from school. So she decided to train the parents as well. Mothers come in the evenings to learn how to groom themselves and learn basic English. The fathers come in once a month.

Some of the mothers whose children studied at the Kiran School are now working there as teachers.

A teacher, Abida Abdul Waheed, from Musa Lane, has two kids – one studies in Bahria and the other in Habib Girls School. “[Kiran school] is an ideal educational institution. The children used to eat paan and supari. But now they are like any other student of a good school.”

Nasreen, a helper, has two children who now study in reputable private schools. Her husband drives a rickshaw. “We never imagined that our children would go to big schools,” she said. “But now everything has changed. My children speak English, and I also try to talk to them in the language. My husband is so proud.”

Memoirs and gossip: A former bureaucrat shares his experience of working with the govt