Qavi Khan talks about the heyday­s of PTV, the downfa­ll of Lollyw­ood and his aspira­tions for the future.
By Saadia Qamar
Published: December 25, 2011
Tweet Email 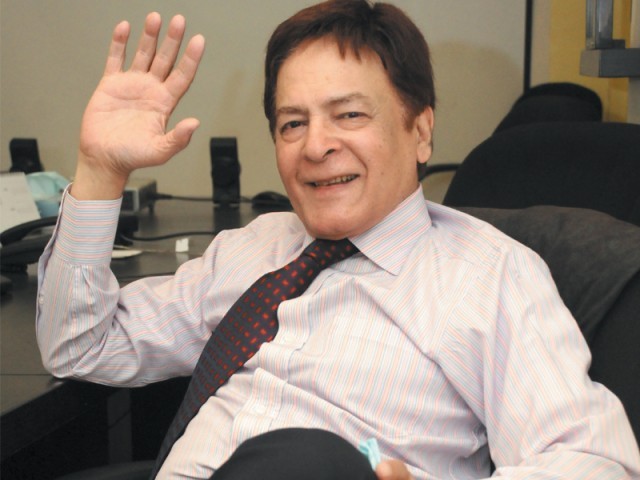 Qavi Khan opens up about his past performances and shares the secret behind his powerful acting. PHOTO: ASHRAF MEMON/EXPRESS

His riveting performance as Ghalib at Pakistan National Council of Arts (PNCA) or his acting in PTV drama “Koi Na Adda Sanj Mila” are a testament to Qavi Khan claim. Besides television and theatre, he has continuously showcased his artistic ability  in films and radio as well. Currently, the actor has his eyes set on a project for the Express Entertainment Channel called “Main Baba Ki Ladli”.

Launching his career from PTV and Lollywood films in 1964, he was one of the few actors who witnessed the decline of the film industry up close. He recalls the audience from that time, “as pure entertainment lovers with no reverence and respect for art, or the heritage and culture of Pakistan. It was the audience’s appetite for obscene content that contributed to the industry’s decline and its eventual downfall.”

Khan, however, is quite optimistic about the present state of television. “The mushrooming of private channels has given rise to great content. Previously, PTV was the only channel on television. Hence, there were fewer opportunities for producers to air their serials. Today, the audience has a range of channels available. Although talent has been given due exposure on private productions, keeping Pakistani tradition alive on screen and staying true to our culture remains our biggest challenge.” Khan adds, “If PTV had kept its workers happy and given them growth opportunities, there would be no need for other channels. After all, there was a time when people only viewed PTV.”

Khan’s biggest criticism of the current entertainment industry remains the unjust financial compensation given to artists. “A true artist is a priceless gem, not a person to be looked down upon. It tortures me when charitable organisations collect money in the names of legendary comedians like Lehri or Mehdi Hasan. Financial assistance to these artists should come directly from the Ministry of Culture. Unfortunately, the government doesn’t listen to artists like me.”

When it comes to his own performances, Khan remains extremely critical of his own work. “Nobody in Pakistan played Ghalib like Subhani Ba Younus or Naseeruddin Shah. If you think I performed well, it was only because I had immersed myself in all of Ghalib’s literature; I researched immensely and discussed the poet with writer Ashfaq Ahmad in great detail.” Besides Ahmad, Khan relied on discussions with contemporaries like director Khawaja Moinuddin, drama writer Imtiaz Ali Taj and theatre practitioner Rafi Peer to culminate more thought into his acting endeavours.

Looking ahead, Khan foresees a positive future for the entertainment industry in Pakistan. “This is a time for great change. Things are starting to move in the right direction. I’m hoping for a revival of the artistic form and for commercialism to fade.”