Internet advocacy: Blogs in Pakistan – no more a silent revolution

Internet advocacy: Blogs in Pakistan – no more a silent revolution 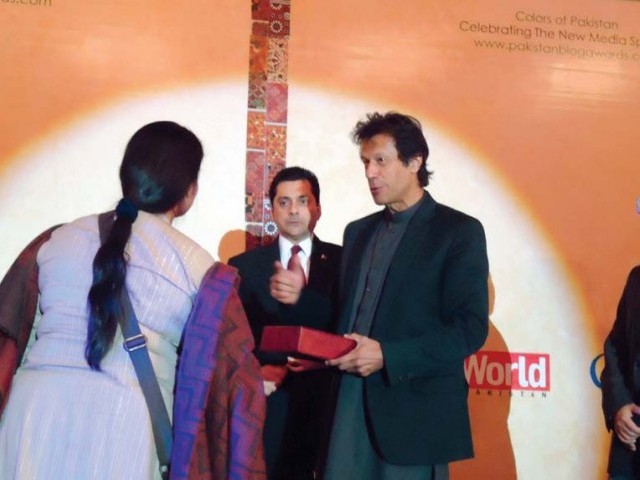 PTI chief Imran Khan, who made a surprise appearance at the Pakistan Blog awards held in Karachi, said bloggers are part of a revolution. PHOTO: SIDRAH MOIZ KHAN

To the audience’s delight, Pakistan Tehreek-e-Insaf chief Imran Khan made a surprise entrance at the second Pakistan Blog Awards that kicked off Friday evening at the Regent Plaza hotel.

Acknowledging bloggers in Pakistan, Imran said that a silent revolution is building up in Pakistan and that the bloggers are a vital part of the revolution.

“Political class is in a state of shock due to this revolution,” the PTI chief said. Stand-up comedian Sami Shah had his reservations about Imran’s presence, saying, “It turned political all of a sudden”. However, Shah said that the event was a positive step.

The awards were attended by prominent, as well as the not-so-prominent faces of the Pakistani blogosphere and cyberspace. The popular opinion remained that the blogosphere has shown an exponential growth.

“This year around, it is great,” blogger Sana Saleem said. “You can gauge the importance of media from the fact that almost every news organisation’s website has a blog now,” she added.

Applause roared across the hall, which housed around 300 people, as Rabia Gharib, the host for the event started to announce the winners.

“Each nomination represents a different hue of Pakistan,” Gharib said.

Jehan Ara, who began blogging a few years back, said that there were about 25 blog nominations in every category.

However, prominent talk-show host Faisal Qureshi said, “Pakistani blogs have quantity, but don’t have quality. We are a nation of complainers, not advocacy. We should be more responsible about our content,” he added.

“Internet usage is converging in Pakistan, which is helping new and social media,” said Badar Khushnood, the Google Pakistan’s country consultant. “There is always a certain level of noise and hype, but in my belief, blogs have done a lot of good to citizen journalism.”
Published in The Express Tribune, December 24th, 2011.