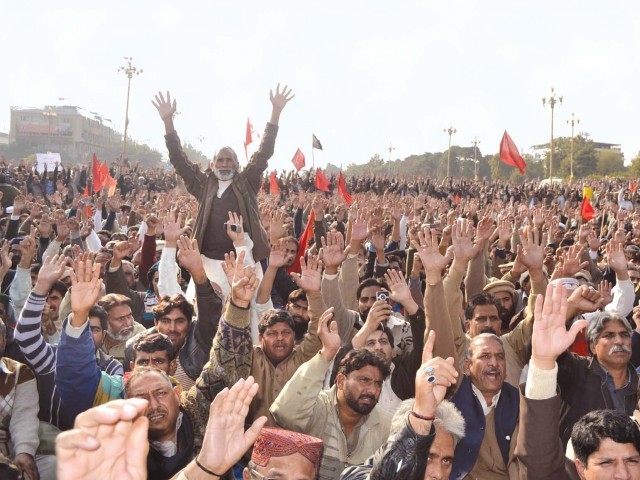 Wapda employees protest against the privatisation plan in front of the Parliament House on Wednesday. PHOTO: MUHAMMAD JAVAID

The proposal to privatise power distribution companies of Water and Power Development Authority (Wapda) is a conspiracy that will affect thousands of employees.

“We will not sit calmly until the government reviews its proposal,”said All Pakistan Hydro Electric Labour Union’s Secretary General Khurshid Ahmed at a rally of hundreds of Wapda employees outside the parliament house on Wednesday to protest against the proposed privatisation plan.

Carrying banners and placards inscribed with slogans in favour of their demands, they urged the government to review its proposal in the “best interest of the country”.

Ahmed said that Wapda used to earn Rs10 billion in annual profits and the amount has decreased sharply only because the government appointed incompetent officials in the organisation. “The country is facing tough challenges and corruption is one of the biggest issues. Instead of strengthening the institutions, the government is trying to privatise Wapda’s distribution companies, which is unjust,” he added.