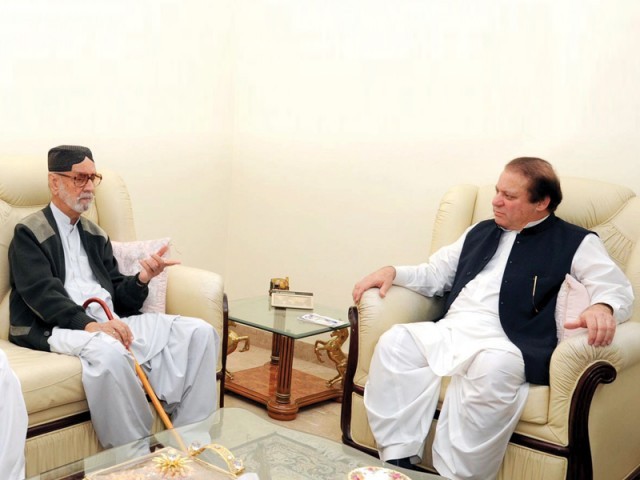 The route from the airport to the hotel Pakistan Muslim League (PML-N) chief Nawaz Sharif is staying at is decorated with party banners welcoming him to the city. But his arrival in Karachi, preceding his meetings with veteran Baloch politician Sardar Ataullah Mengal as well as with several entrepreneurs, was far from cheery. Sharif’s supporters, the media, and his security detail were involved in a melee that saw several reporters complaining of injuries and broken equipment.

The public scuffle at the airport in the afternoon, however, did not interfere with the PML-N chief’s schedule, who arrived at the Pearl Continental Hotel to attend an entrepreneurship event. He then headed to Mengal’s residence, where the two leaders addressed journalists after their meeting.

Nawaz said he had great respect for Mengal and hailed the role he and the late Nawab Akbar Bugti played in ending the short-lived eighth amendment (which granted extra powers to the president) to the constitution during his 1997 government.

“I wanted to know how Sardar sahib’s grievances can be resolved,” Sharif said, adding that Mengal had been very open during their discussion. “People need to be given their rights and we needed to end all differences.”

“Mian sahib has reminded us of the mistakes we made,” Mengal said. “We are still paying for these mistakes. It is important that these are not repeated again.”

“I have told Mian sahib – and I am asking Pakistan as well, via the media – to first tell us what our status is? It is very difficult for us to determine this.”

The seasoned Baloch politician also spoke at length about killings in the province. “There are 20, 40 people killed in Karachi every day… but why has our ‘beloved’ military never reacted to the killings in Karachi like they do in Balochistan?” he said. He added, “People are killed in Balochistan for being Punjabi and this is wrong. But where is this stated that the military can pick someone up and then dump his corpse? We have now found out – and I’m sorry Mian sahib – that the military only punishes those who kill Punjabis”. Mengal further said that if some misguided youth have killed Punjabis, was the military also misguided or was this being done under a “well-thought-out plan?”

Mengal said that he hoped Sharif would address the issue, and added there was also a need to speak to young people who have been ‘forced to retaliate’ because of the military’s excesses. “There will come a point when Balochistan’s youth will not listen to me or anyone else,” he warned. “They have decided that they cannot be a part of a country that treats them like this.”

He also criticised Interior Minister Rehman Malik for his “frequent warnings” to Baloch groups that they should give up arms and then talk. “Doesn’t he know who is in charge?”

Nawaz takes up the cause

Both leaders appeared to be on the same page, as Sharif said he agreed with Mengal and that the PML-N “would fight Balochistan’s case”.

When asked by The Express Tribune whether he would initiate proceedings against former and serving military officials who are responsible for the extrajudicial killings and disappearances in Balochistan, Sharif said, “We will not be able to continue without any accountability (on this), or on who killed Nawab Akbar Bugti. The current government also needs to do something.”

He said that he would be happy if he could enter into an alliance with Mengal’s son, Akhtar Mengal, whom he considers ‘a friend and brother’.