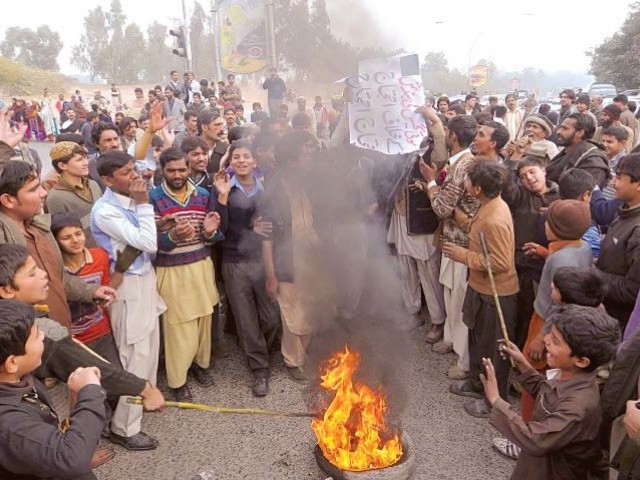 Enraged by continuous low pressure of gas and shut down A large number of people here on Monday protested against low gas pressure in different areas of the city, blocking major roads for hours and creating traffic gridlock and snarl on main highways.

In a related development, the owners of three CNG stations approached the Lahore High Court (LHC) Rawalpindi Bench challenging the suspension of gas supply for three days a week to the gas stations.

Protesters, including women and children, assembled on Murree Road, Kurri Road, Islamabad Expressway and Airport Road in the morning chanting slogans against the government and Sui Northern Gas Pipelines (SNGPL) authorities for the low gas pressure in the morning and in the evening compounding the problems of the people due to the chilly weather in the twin cities.

Traffic remained suspended on the two major roads in Rawalpindi for about six hours, with protesters saying they were forced to leave their homes without breakfast.

“These are difficult times as every citizen is concerned about how food will be cooked in the absence of gas supply. The alternatives are either difficult to manage or just too expensive”, said Shahid Sultan Ahmed, a protesters on Airport Road.

Using woods as fuel is not manageable in urban areas, especially indoors, and liquefied petroleum gas (LPG) is more expensive than natural gas, the protester said.

The city’s traffic wardens tried their best to manage the flow of traffic, but the blockade of major arteries left them banging their heads as a sea of stationary cars was seen on these roads during the protests.

The district police closely observed the protests but did not try to stop or disperse the protesting citizens. The protesters were led by local Pakistan Muslim League-N leaders.

Similar protests over the weekend led to hours-long blockages on IJ Principal Road and Islamabad Highway.

In the other development, the LHC Rawalpindi Bench directed the petroleum secretary, Oil and Gas Regulatory Authority (OGRA) chairman and (SNGPL) managing director to submit para-wise comments in response to three identical petitions filed by the CNG owners.

The petitions challenged the August 10, 2011 SNGPL notification that stopped the supply of gas to CNG stations in Islamabad and Punjab for three days a week.

The petitioners said that following an interim order of Islamabad High Court, SNGPL had been providing gas for seven days a week. The petitioners called it discrimination and said that the LHC should also direct the authorities to supply gas to CNG suppliers in Rawalpindi to avoid huge financial losses to the business community.

The LHC will take up the petitions again on December 29.

Tides of misfortune: Jilted by a cruel fate