Jones says he believ­ed the memo was not credib­le and that Haqqan­i had nothin­g to do with it.
By Faisal Shakeel / Express
Published: December 17, 2011
Tweet Email 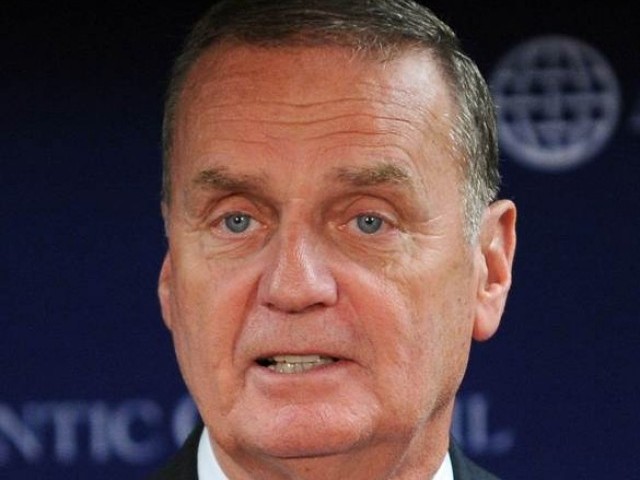 Gen (retd) James Logan Jones, former US national security adviser, and the man that handed the memo to the then-chief of US military Admiral Michael Mullen, filed his statement in the Supreme Court on Saturday. PHOTO: AFP/FILE

ISLAMABAD: Gen (retd) James Logan Jones, former US national security adviser, and the man who handed the memo to the then-chief of US military Admiral Michael Mullen, filed his statement in the Supreme Court on Saturday.

Advocate on Record (AOR) Chaudhry Akhtar Ali submitted the statement to the court in the form of an affidavit. Former ambassador to the United States (US) Husain Haqqani’s counsel Asma Jehangir had requested Jones to file the affidavit in the case, according to the three page document submitted to the Supreme Court.

Jones says he believed the memo was not credible and that Haqqani had nothing to do with it.

According to Mansoor Ijaz’s reply, submitted to the court earlier in the Memogate case, Jones had first refused to deliver a verbal message from the “highest authority” in Pakistan to Mullen.

Upon his refusal, Ijaz alleged he had drafted the memo under instructions from Haqqani. It is not clear why General (retd) Jones delivered the memo to Mullen when he had doubted the credibility of the document.

Jones in his reply states that he thought the memo was written by Ijaz himself.

Excerpts from the affidavit:

“I was in private life at all times relevant to the matters (memogate). I make this affidavit in response to a request from Pakistani counsel for former Pakistan Ambassador to the United States Husain Haqqani. It is my understanding that the affidavit may be used on his behalf with respect to an investigation currently under way in Pakistan.”

“A few days before May 9, 2011 I received a phone call from Mr Mansoor Ijaz. I have known Mr Ijaz in a personal capacity since 2006. During the call Mr Ijaz mentioned that he had a message from the “highest authority” in the Pakistan government which he asked me to relay to then chairman of the Joint Chiefs of Staff, Admiral Michael Mullen. At no time during the call do I remember Mr Ijaz mentioning Ambassador Haqqani, and he gave me no reason to believe that he was acting at the direction of Ambassador Haqqani, with his participation, or that Ambassador Haqqani had knowledge of the call or contents of the message.”

“On May 9th I received an email from Mr Ijaz attaching an unsigned memo. The e-mail was sent to my personal e-mail address by Mr Ijaz. The memo was not marked classified or restricted … Mr Ijaz again stated that the memo was authorised by the ‘highest authority’ within the Pakistan government. Mr Ijaz asked that I deliver the memo to Admiral Mullen. It was my assumption that the memo was written by Mr Ijaz, since the memo essentially put into writing the language he had used in our telephone conversation earlier.”

“… I felt obligated to forward it, as requested, to Admiral Mullen. Admiral Mullen, in his official capacity was better able to make a judgment as to the memo’s credibility … Accordingly on May 10th, I emailed the memo to Admiral Mullen. It is my understanding from Admiral Mullen’s public statement on the matterthat he reviewed the memo, did not find it credible, and did not take any action.”

Tribune Take: Documentary filmmaking in dangerous corners of the world