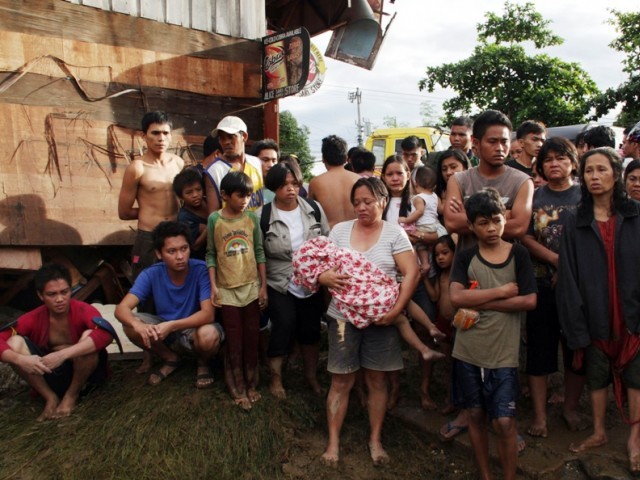 Residents stand around a woman holding the dead body of her child killed during the passage of tropical storm Washi at a village in Iligan City, on the southern island of Mindanao on December 17, 2011. PHOTO: AFP/ FILE

MANILA: The death toll from tropical storm Washi rose to 143 on Saturday with more than 100 others missing after widespread flash floods in the southern Philippines, officials said.

The military said 95 bodies were recovered in Cagayan de Oro, a major port on Mindanao island, while the National Disaster Risk Reduction and Management Council said 48 people were killed elsewhere on the island.

He said an entire army division – about 10,000 soldiers – was involved in rescue efforts for the stricken city of half a million people, with three military helicopters aloft above the receding waters to look for survivors.

A total of 125 other people remain missing in the city, he said.

Civil defence director Benito Ramos, the head of the disaster council, said a second army division was deployed in Iligan, a nearby port which reported 40 deaths, and nearby areas.

Although residents had been warned of the approaching storm, some apparently dismissed the dangers of flash floods and landslides because – unlike the rest of the archipelago – most of Mindanao is rarely hit by storms.

All but five of the confirmed deaths were victims of flash floods, he said. The five others were buried in a landslide in the island’s mountainous east.

The Philippines is hit by about 20 storms and typhoons each year, most hitting the north of the country.