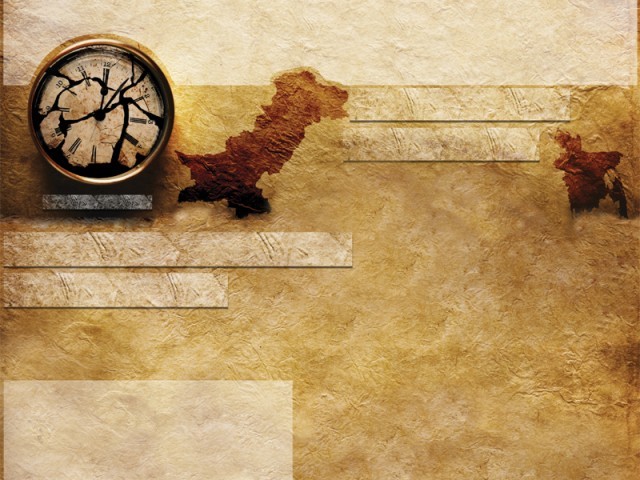 A Pakistan army officer recalls his experience with his Indian counterparts immediately after laying down arms.

The last days of the 1971 war are often distorted, obscured or – perhaps worst of all – forgotten.

Forty years on, I want the next generation to glimpse the event through a person who was part of it. I hope my story will help younger Pakistanis understand how human behaviour changes when circumstances change, how it took the war to end for me to truly understand it.

At 6am on December 17, 1971, I reached Cadet College Faujdarhat on the outskirts of Chittagong. All Pakistan Army officers had been ordered at midnight to gather at the college and lay down their arms.

Indian Army Brigadier Sindhu, who had led the occupation of Chittagong, acted gracefully and did not humiliate us, as was done in Dhaka where fighting had ceased the previous day. One reason for this could be that Pakistan Army Brigadier Taskeenudin, who was surrendering, had been his instructor at the Indian Military Academy before Partition.

I entered through the college’s main gate and saw Lt-Col. Ashiq, who was commander of the force deployed on Comilla-Chittagong Axis, pacing up and down outside the main office building.

I was ordered to get hold of three captains and immediately contact the leading Indian force commander on Comilla Road. But most officers refused to accompany me, except Captain Sarfaraz of the East Pakistan Civil Armed Forces. With a white flag on top of our jeep, we moved out to meet the Indians.

We reached a nullah where a bridge had been demolished. A Sikh major, who had crossed the nullah with a platoon, appeared and told me to return with troop-carrying vehicles. I went back to the college and reported the matter to Brigade Major Fakhar who told me to take away all buses and trucks that were available. While the vehicles were there, all the drivers, who were civilians, had vanished.

I mounted a .30 Browning on my jeep and manned it myself. Meanwhile, I spotted Captain Mansoor who agreed to follow me in his jeep. As we opened the gate, the enraged crowd outside the college became silent. Fear and anxiety gripped me – we could not rule out the possibility of the crowd attacking us or at least shooting at us. We could identify the Muktis as they carried sten guns.

Nevertheless, Capt. Mansoor and I moved forward, with my finger on the gun’s trigger. Fortunately, the crowd remained motionless and, in fact, parted to make way for us as we drove along.

My painful journey to surrender

By the time we got back, the Pakistan Army’s company strength had crossed over the nullah and taken position.  The Sikh major retained all Pakistan Army captains and I was told to accompany a havaldar, who would escort me to Indian Brigade Commander Brig. Sindhu.

We descended into the deep nullah and saw Indian engineers building passages. As I passed them by, they saluted me even though they could tell I was a Pakistani due to my uniform. Their conduct left me with a positive impression about the Indian Army. At the nullah’s other end, I saw another Pakistan Army company strength mounted on vehicles, ready to go across.

I was put in a jeep to be carried to Brig. Sindhu. We had only covered a mile or two, when we saw the brigade commander approaching from the opposite side. Brig. Sindhu got off his jeep, I saluted and he shook my hand. I sat in the jeep, where his DQ was already sitting with a wireless set. But the jeep hit the nullah and we crossed it on foot, leaving the jeep behind.

At the other bank, a few civilians waited with a Mercedes to receive and greet the victors. A man introduced himself as a relative of a famous Awami League leader and offered the car to the brigadier who refused the car and, pointing towards my jeep, said, “I will use the Pakistan Army’s jeep.”

However, he did go for a meeting with them which I felt was pre-arranged. After the meeting, he came over to me and asked me for suggestions on taking over the city. I suggested only that all Bihari localities be protected immediately as they were at risk of attack by Bengalis.

By this time, the engineers had managed to bring across the brigadier’s jeep and a message was immediately passed to transport the Bihar Regiment to Chittagong to protect the Bihari population. The two captains who had accompanied me would serve as guides.

Brig. Sindhu then asked me to guide him to the commissioner’s office. I knew of its location as I had presided over a summary military court that was located there before General Yahya Khan declared war. The building was built on high ground, affording a view of a large part of the city. When we got there, only the brigadier went into the office and we were left outside on the verandah.

The joy of freedom

From there, I saw citizens of Chittagong celebrate India’s victory and their freedom. Jubilant young girls and boys, wearing colourful clothes, carried Indian and Bangladeshi flags. Vehicles playing loud music sped through the roads. People shouted anti-Pakistan and pro-India slogans and of course “Joi Bangla”. Within 20 to 30 minutes, the number of people and vehicles increased exponentially. I am the only unfortunate officer who witnessed that painful sight. The tormenting thought and feelings that crossed my mind can not be expressed through words.

The crowd eventually made its way to the commissioner’s office. People carried garlands and bouquets for the Indian army, their liberators. They came forward to place garlands around the necks of the Indian officers but one girl smilingly approached me and said, “I know you are Pakistani but never mind, you can also share our happiness”, and gave me a garland.

Suddenly, one of the Indian officers caught me by the arm and pulled me back, covering me, while yelling, “catch him”. I noticed a young boy holding a sten gun run out of the crowd. No one followed him. The boy was trying to shoot at me but before he could, the Indian officer saved me.

A round of the city

Brig. Sindhu then took a round of the city, particularly Bihari localities.

It was as if no one inhabited Bihar Colony. White flags, and not Bangladeshi flags, were put up on all the houses.

It was a painful sight for me and I thought of how young Biharis had wholeheartedly supported Pakistan during the nine months of civil war. Doors and windows were closed, but a few minutes later, we saw some people peering through. Brig. Sindhu asked me to call the residents out of their houses so that he could address them.

Initially, no one came out. But when I announced through a portable loudspeaker that I was a Pakistani and had brought Indians who will protect them, the elderly began to come outside. Brig. Sindhu, in his short address, told them that the Bihar Regiment had been deployed for their protection. The Biharis were visibly relieved.

I was gripped by guilt. I knew that these people had wholeheartedly supported Pakistan Army first against the Mukti Bahini and then against the Indians. And here they were, abandoned and desperate.

The situation was similar in Railway Colony and Adamjee Nagar. By evening, we reached Agrabad Hotel, a restaurant I used to frequent with other officers. Brig. Sindhu decided to have a cup of tea there, and the waiters, who recognised me, met me with mixed emotions.

Finally, I was relieved of the unpleasant duty. But I have the satisfaction that I was instrumental in ensuring protection for non-Bengalis at a time when they needed it the most.

But while the Indian officers escorted me to the Pakistan Army officers’ mess, they received another assignment which they wanted to complete through me.

They wanted me to make a list of people, confined in a big school building, who had survived the massacre of Bihari families in Karnaphuli Paper Mills and other industries that provided accommodation to their workers.

I entered the building and was shocked to see several hundred women and children. A few of them hurriedly approached me, asking if I had brought food. I could not bear it. I still shiver as I recall.

I immediately left the building and told the Indian officers that I would not do the job. Recognising my pain, they did not insist and dropped me at the officers’ mess to join all the officers of the Chittagong Garrison.

The writer is a retired major of the Pakistan Army who served as a first-line soldier in the 1971 war.

Which article would keep the president at bay?