Suicid­e missio­ns are most prized, talk of peace but milita­nts eager to fight.
By Reuters
Published: December 14, 2011
Tweet Email 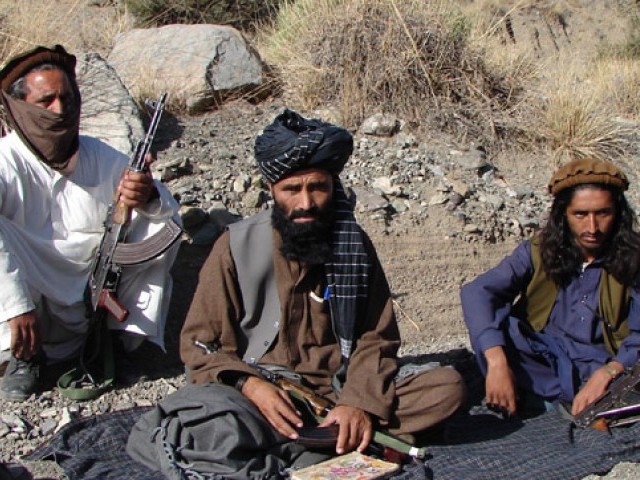 "If you are so brave come out and fight us". PHOTO: AFP/FILE

LADDA: Pakistan’s Taliban say they have started peace talks, but in a mountain camp, young recruits learn how to mount ambushes, raid military facilities and undertake the most coveted missions — suicide bombings.

“America, NATO and other countries could do nothing to us despite having nuclear weapons,” said Shamim Mehsud, a senior Taliban commander training the fighters who hold AK-47 assault rifles and cover their faces with white cloth.

“Our suicide bombers turn their bones into bullets, flesh into explosives and blood into petrol and bravely fight them, and they have no answer to that.”

On Saturday the deputy commander of the Tehreek-i-Taliban (TTP), said exploratory peace talks with the US-backed government were underway.

Pakistan’s prime minister Yousaf Raza Gilani denied this and said Pakistan would negotiate only if the group, which has been waging a four-year insurgency, laid down its arms.

There are no signs they intend to do that in the camp in South Waziristan near the Afghan border. It is in unruly tribal areas like this where the umbrella group is entrenched.

Taliban commanders escorted a small group of journalists, including a Reuters reporter, to the remote camp.

To get there without running into army checkpoints, they drove to North Waziristan, where the army has limited control, and then walked uphill for 15 hours over rugged terrain.

On the way they came across fighters from Turkmenistan, a reminder that parts of Pakistan are a global hub for militants.

What they discovered at the training ground is that the Taliban are highly disciplined and determined. They rise at dawn for prayers and then have a simple breakfast of tea and flatbread before the training starts.

The militants jog in the high-altitude valley, and do push-ups, somersaults and jumping to hone the skills necessary for fighting in the harsh conditions on the border.

In close-quarters combat training, fighters slam each other on to the rocky ground and then spring back up and chant “God is greatest.”

In another drill, one of the fighters wears a uniform taken from a dead Pakistani soldier. Others sneak up, take him down and snatch his weapon.

Men such as these will face the Pakistani army, one of the biggest in the world, and are potential targets for US drone aircraft missile strikes.

Their rocket-propelled grenades and assault rifles are no match for the firepower and technology of their enemies. But they seem unfazed by the tough odds and say they welcome death.

“It is my good fortune that I have been chosen for this holy task,” said a 22-year-old fighter who goes by the codename Commando. “I am eagerly awaiting my chance to wage war and sacrifice myself against the infidels.”

The TTP, which is allied with the Afghan Taliban and al Qaeda, pledged to overthrow the Pakistani government after the military started operations against militant groups in 2007.

It is blamed for many of the suicide bombings across Pakistan and has carried out audacious attacks, including one on military headquarters near the capital Islamabad in 2009. The United States has labelled the TTP a terrorist group.

When they are not training or praying, the fighters help carry supplies and ammunition to frontlines by mule and travel long distances to cities to buy food and other goods.

To relax, they play volleyball on a makeshift court and have wrestling matches where the contestants are cheered and taunted. One wrestler was asked how he would wage war when he could not wrestle.

At night they tune in to the Pashtu services of Western radio outlets and usually don’t like what they hear.

“Why do they call us terrorists? America is the terrorist because it drops bombs on Muslims,” said a 17-year-old called Malang, or free spirit.

A DVD player that is connected to a car battery offers fighters the chance to watch TTP videos of successful operations against the military.

Sometimes the militants’ communications radios cross signals with nearby army radios. One night the reporters overheard a conversation between the enemies.

“If you are so brave come out and fight us,” said one fighter.

“Don’t worry,” a soldier replied. “We are coming.”