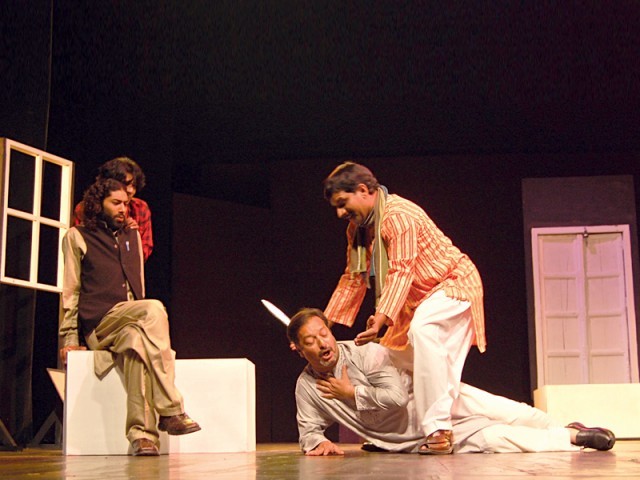 Artists perform in a play organised at PNCA on Tuesday. PHOTO: MUHAMMAD JAVAID

The National Drama Festival’s second play “Deewana Bkar-e-Khwaish Hushiuyar’ was a Punjabi suspense-comedy depicting the two faces that individuals often don. However the play cautions that though at times these facades can be malicious, sometimes individuals are left with no choice but to employ a thicker, secondary skin to protect themselves or make ends meet.

Performing at Pakistan National Council of the Arts (PNCA), the cast of the play were from Azaad Theatre Group, Lahore who changed their former name to Azaad with the hope of taking the group and their theatricality in a new direction.

The play, written by Rafih Pir and directed by Malik Aslam, opens with Shah Saab (Usman Zia) and his trusted servant Bholay, meaning innocent, debating Bholay’s work ethic. Shah Saab accuses him of cutting corners at work and being lazy, but quickly shows affection for Bholay when he notices his work ethic.

Chaudhary Ashiq Nawaz (Imran-ul-Haq) interrupts the two, saying that he is interested in renting a portion of Shah Saab’s house. Nawaz describes himself as a poet and songwriter, but his anxious persona and quirkiness make the pair suspect his competence.

The anxious poet’s fears in relation to the house are further aggravated when the guard of a neighbouring lunatic asylum (pagalkhana) notifies them that a murderous madman has escaped. The guard says that the fugitive is seemingly a poised man and a master of disguise. He says that at the asylum the runaway had duped patients and guards while impersonating “Sultana Daku” (The king of thieves), “molvi” (cleric) and even a doctor.

This characteristic of the madman denotes the many faces of society and its individuals. However, much like the man who has to hide behind these personas to escape the concrete asylum bounding him, an individual’s desperation can force him to hide his true self to escape harsh realities like poverty.

This shift in personas is confirmed when Shah Saab’s trusted Bholay is found to be stealing from him and is affiliated with a criminal gang, while the runaway is impersonating a policeman as a ruse. Furthermore, the bumbling poet is revealed to be the superintendent of police working undercover in an effort to unveil Bholay’s not so innocent side.