US Secret­ary of Defenc­e says it is import­ant to reach out to Pakist­an if US wants to disman­tle Afghan milita­nt havens.
By AFP
Published: December 13, 2011
Tweet Email 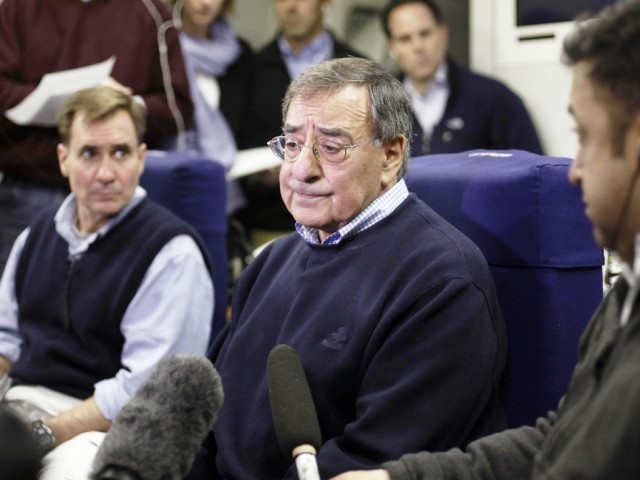 US Secretary of Defence says it is important to reach out to Pakistan if US wants to dismantle Afghan militant havens. PHOTO: AFP

KABUL: US Secretary of Defence Leon Panetta said on Tuesday that it was important to reach out to Pakistan if the United States wants to dismantle Afghan militant havens.

“It’s been said a number of times that ultimately we can’t win the war in Afghanistan without being able to win in our relationship with Pakistan as well,” said Panetta.

The US Secretary of Defence is visiting Kabul to discuss the situation in Pakistan and to reaffirm America’s commitment to Afghanistan as Washington starts to withdraw combat troops and hand over security to Afghan forces.

Pakistan shut the US supply line into landlocked Afghanistan on November 26 after the Nato attack on a Pakistani check post that killed 25 Pakistani soldiers, saying that the blockade could last weeks longer, and forced Americans to leave the Shamsi air base.

US officials have accused Pakistan of supporting the Afghan Taliban and its Haqqani faction, whose leaders are based on Pakistani soil.

“They have provided cooperation in areas that have been important to us and at the same time we’ve had some serious difficulties with regards to the operations that involve groups in the Fata (Pakistan’s tribal belt) and groups along the border.”

Pakistan called the November 26 attack deliberate. US commanders deny it was intentional. US investigators are due to submit a report on December 23.

“In the end Pakistan and the US do share the same concerns with regards to terrorism,” said Panetta.

Afghanistan and the US troops’ withdrawal

The Pentagon chief says that violence is falling in Afghanistan, where the US has been at war with the Taliban for 10 years.

“I think 2011 will mark a turning point with regards with the efforts to Afghanistan,” Panetta told journalists on the flight to Kabul.

“Troops have been able to reduce the levels of violence there. They are successful in securing some of the key areas in Afghanistan. There’s greater success in the Afghan military and police.”

The number corresponds to the 33,000 “surge” troops ordered in by President Barack Obama in late 2009 in a bid to reverse the Taliban insurgency, defeat al Qaeda and quicken an end to the war.

Recent media reports, not denied by the Pentagon, say the focus of the US mission is turning increasingly to building up the Afghan army to take on more responsibility in the fight against the Taliban.

Panetta welcomed the “significant achievement” of a second phase of transition from Nato to Afghan security control, which was launched this month in conjunction with the planned exit of all Nato combat troops in 2014.

In the second wave, Afghan forces will take charge of six provinces, seven provincial capitals and more than 40 districts, including three in the southern province of Helmand, one of most deadly in the conflict.

More than half of Afghans live in an area included in either the first or second phase of transition, according to Karzai.

“That of course requires greater and greater efforts by the ANSF (Afghan National Security Forces) as they’re moving to the lead,” a senior US defence official said, speaking anonymously.

During his two-day visit, the former CIA director will also meet General John Allen, the US commander in Afghanistan, troops and US embassy staff.

The Pentagon chief, who made a brief stop in Djibouti before arriving in Kabul, will next travel to Iraq, Turkey and Libya.