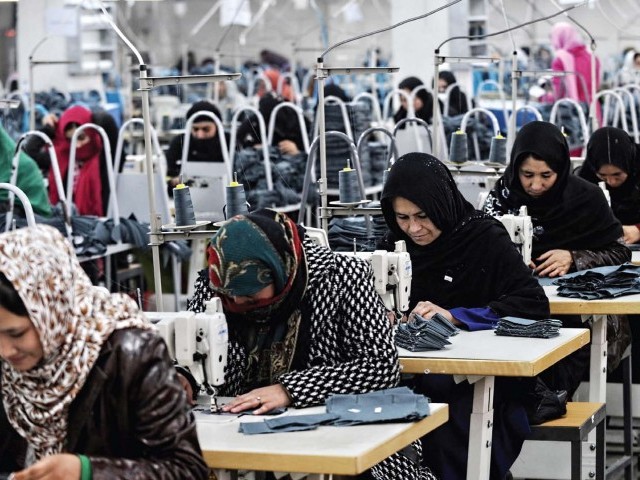 ‘Representation in unions not commensurate with numbers’.

The lack of a united women’s movement is a hurdle to working women’s struggle for their rights at workplaces, a study by sociologists at the University of Agriculture Faisalabad (UAF) has concluded.

Qamar Zia, Zahira Batool and Hammad Badar of the Rural Sociology Department on Thursday gave a presentation based on the study of working conditions of and problems faced by women workers at industrial units in Faisalabad.

The study said the representation of working women in trade unions was not commensurate with their numbers at the industrial units. It said that women workers were mostly given low-skill tasks and that lack of knowledge about their rights hampered them in articulating their demands effectively.

While those employed at factories formed a very small part of trade unions, the study said, no mechanism was in place for home-based women workers to organise and bargain. The study said most rural women were drawn towards factory labour because of low family incomes, illiteracy and a lack of alternatives.

It said though there was some improvement in the attitude of community and employers towards women workers, much more was needed to encourage more women into taking up jobs.

Family incomes could be increased and rural poverty reduced with more women employed, the study added.

The study identified a low level of education and a bias against women working outside their homes, particularly in rural areas, as factors limiting their participation in the formal sector of the economy. It said that by modifying technical education system such that skill formation opportunities were available to more women, the government was trying to address the low level of women employment in the formal sector. Also, it said, women could be encouraged to start small-scale businesses by equipping them with relevant skills. Speaking on the occasion, the experts said in the coming days most families would find their women forced to seek employment outside their homes.

The study said Pakistan was currently the seventh most populous country in the world.

“Pakistan’s population is likely to reach 222 million by the year 2020. The high growth rate will render most efforts at development useless unless women’s participation in the economy increases and their rights are safeguarded,” they said.

The study noted that the country’s gross national product had increased from Rs2.6 billion in 1950 to Rs61.8 billion in 2000 yet a similar rise had not been witnessed in the per capita incomes because of a disproportionately higher increase in the population.