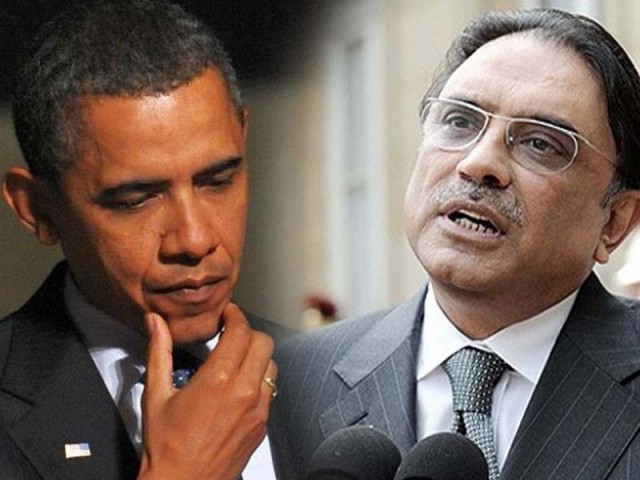 WASHINGTON: The United States Wednesday wished Pakistani President Asif Ali Zardari well after aides said he suffered a heart attack and dismissed rumours that the civilian leader was being pushed out.

“We have seen the reports. We certainly wish him a speedy recovery,” said White House spokesman Jay Carney.

Zardari’s illness sparked media reports that he is contemplating resignation, but loyalists ruled out the idea he may step down.

State Department spokesman Mark Toner, asked if the United States was worried that a quiet coup was underway against the embattled president, said: “No concerns and no reason to believe” the speculation.

“Our belief is that it’s completely health-related,” Toner told reporters.

Zardari is considered to have a fraught relationship with the military, which historically has been Pakistan’s most powerful institution and has repeatedly pushed aside elected leaders.

Mustafa Khokhar, an adviser to Pakistan’s prime minister on human rights who sits in the cabinet, told AFP in Islamabad that Zardari suffered “a minor heart attack” on Tuesday.

“He flew to Dubai where he had an angioplasty. He’s in good health now,” Khokhar said.

“There’s no question of any resignation,” he added.

The 56-year-old head of state left Pakistan for treatment after falling ill in the midst of a major scandal over alleged attempts by a close aide to seek US help to limit the power of Pakistan’s military.

His illness also comes at a time of deep crisis for Washington’s fraught anti-terror alliance with Pakistan.

Ties between the United States and Islamabad plummeted after a US commando raid killed Al-Qaeda leader Osama bin Laden in the Pakistani garrison town of Abbottabad, north of the capital Islamabad, in May.

US President Barack Obama on Sunday expressed condolences to Zardari in a telephone conversation over the deaths but said the incident was not a “deliberate attack.”

The 56-year-old head of state flew to the United Arab Emirates on Tuesday after falling ill in the midst of a major scandal over alleged attempts by a close aide to seek US help to limit the power of Pakistan’s military.

His illness sparked media reports that he is contemplating resignation, but loyalists have ruled out any question that he may step down and the president has defied many critics in already holding onto power for three years.

“He had a minor heart attack on Tuesday. He flew to Dubai where he had an angioplasty. He’s in good health now,” Mustafa Khokhar, adviser to the prime minister on human rights who sits in the cabinet, told AFP.

“There’s no question of any resignation,” he added.

The prime minister office said the president was “stable” but would remain under observation as doctors examine the cause of his illness.

A statement gave no timeframe for the treatment and made no mention of a heart attack, saying only that he went to Dubai following symptoms related to a “pre-existing heart condition” at the “insistence” of his three children.

Zardari is out of the country at a time when Pakistan is battling a major crisis in US relations after NATO air strikes killed 24 Pakistani soldiers on November 26.

In his absence, his powers are transferred to the chairman of the Senate, Farooq Naek, a senior member of Zardari’s Pakistan People’s Party (PPP).

One cabinet minister told a television show that he was being kept in intensive care, but only as a means of keeping visitors to a minimum.

“President Zardari’s condition is now stable. He was taken to ICU because he was getting a lot of visitors,” Petroleum Minister Asim Hussain told Geo TV.

“He will stay there for the next two to three days and will be back home after that.”

The PPP spokesman Qamar Zaman Kaira told AFP that President Zardari has undergone different tests. “All the tests conducted so far are normal and he (Zardari) is stable.”

He was however, not sure when the President will be back home. “It is difficult to say anything right now. It will depend on the doctors’ advice.”

Although he has survived numerous crises and calls for his resignation, he has come under growing pressure over a memo allegedly written by close aide Husain Haqqani asking for American assistance in curbing the powerful military.

Haqqani was forced to resign as ambassador to Washington last month and Zardari said Sunday that he would soon address a joint session of parliament.

It was not clear if the health scare would delay that plan.

Presidential spokesman Farhatullah Babar dismissed reports that he may be forced to step down as “speculative, imaginary and untrue”.

The United States also dismissed rumours of a coup against Zardari.

But the website of the US magazine Foreign Policy reported that Zardari had been considering his resignation over health fears and the “Memogate scandal”.

The article quoted an unnamed former US government official as saying Zardari was “incoherent” when he spoke to President Barack Obama by telephone over the weekend following the lethal NATO strikes.

The scandal centres on a memo sent in May to the US’s then Chairman of the Joint Chiefs of Staff, Admiral Mike Mullen, seeking help over fears of a military coup following a secret US raid that killed Osama bin Laden on May 2.

Mansoor Ijaz, a Pakistani-American businessman, accused Haqqani of crafting the memo with Zardari’s support. Haqqani has denied involvement and investigators have yet to prove to what extent Zardari may have been involved.

Relations between the military and Zardari are understood to be tense. Haqqani’s departure was seen as forced by the army and the political pressure on Zardari is mounting ahead of elections expected as early as next autumn.

In June, US pollsters Pew Research Center gave Zardari an approval rating in Pakistan of only 11 percent.