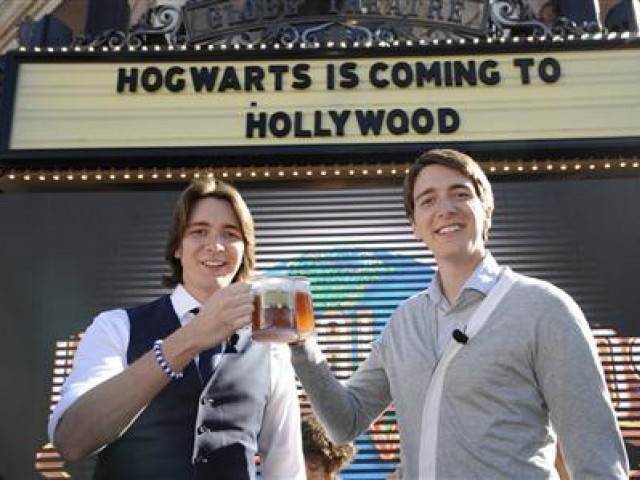 Actors James (L) and Oliver Phelps toast with "butterbeer" following an announcement of the new "The Wizarding World of Harry Potter" attraction to be built at Universal Studios Hollywood in Los Angeles December 6, 2011. PHOTO: REUTERS

LOS ANGELES: Harry Potter is going Hollywood with a new theme park based at Universal Studios that will feature a Hogwarts castle as its centerpiece alongside rollercoasters and other rides.

NBCUniversal and film studio Warner Bros on Tuesday unveiled “The Wizarding World of Harry Potter,” which will be built at the Universal Studios Hollywood site with attractions that are similar to the money-spinning Potter theme park opened in June 2010 at Universal’s resort in Orlando, Florida.

The new theme park could take 3-4 years to construct and is likely to cost several hundred million dollars but will create more than 1,000 jobs and is expected to boost tourism to the Los Angeles area, officials said.

The two companies – Universal runs the theme parks and Warner Bros owns the rights to the “Harry Potter” movies – also said the “Wizarding World” in Florida would be expanded.

Toasting Tuesday’s announcement with mugs of “Butterbeer”, officials said the Hollywood park will be centered around a huge Hogwarts castle and feature rides and other attractions based on the adventures of the popular British boy wizard and his friends who use sorcery to battle evil.

Author JK Rowling’s “Harry Potter” book series have sold some 450 million copies worldwide and the eight movies from the Warner Bros. studios have taken more than $7.7 billion at global box-offices, making the films the largest-grossing franchise in history.

With its “Dragon’s Challenge” rollercoaster and life-size model of the Hogwarts Express train, the 20-acre “Wizarding World” park in Orlando has proved a huge success with fans. It drew more than 7 million visitors in its first year and boosted NBCUniversal’s theme park revenue by 33 percent to $1.5 billion for the first nine months of 2011, according to company results.

Officials did not say how many of the Florida rides would make their way to the Hollywood park, nor did they say if any new rides were envisaged. But they did say the new attraction would be created with the same commitment to authenticity with the books and movies as the one in Florida.

“Everyone involved with these projects is committed to continuing the enchantment of JK Rowling’s masterful books as they were brought to life on screen in our eight films and dedicated to extending the magic of the experience for generations of fans to come,” Meyer said.

The expansion of the Potter franchise follows Walt Disney’s Co’s announcement in September of a theme park based on the 2009 film “Avatar” – the highest-grossing single movie in history.

Work on the “Avatar” park is due to begin in 2013 in a section of Disney World in Orlando, with plans for other locations in the future.