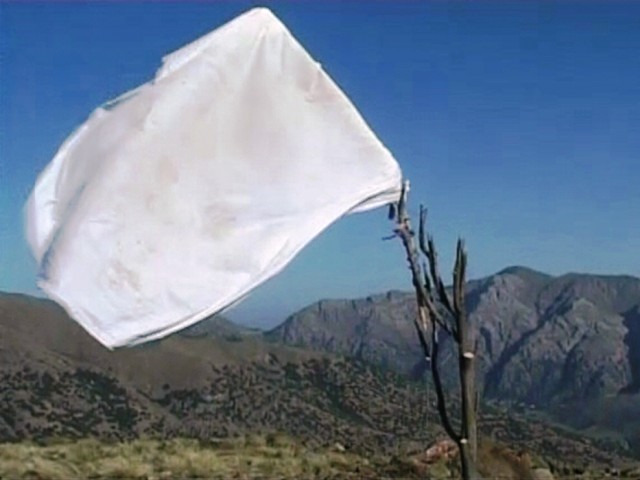 A still image taken from an ISPR (Inter Services Public Relations) video shows a white flag in a Pakistani army post after a Nato attack in the Pakistan-Afghanistan border area November 30, 2011. PHOTO: REUTERS/ISPR

In a move reflecting the gravity of fallout in bilateral relations with the United States, Pakistan withdrew several soldiers from posts along the country’s border with Afghanistan, The Telegraph reported on Tuesday.

The military has called back one officer from each of four posts to army headquarters, the paper said.

Pakistani officers work alongside Nato at four bases along the Afghan border to try to ensure that both sides know the locations of friendly troops.

Lt Col Jimmie Cummings, a spokesperson for the international coalition in Kabul, said the Pakistani military had not notified international forces of any official withdrawal.

“We look forward to continuing our long relationship with them,” he was quoted by The Telegraph as saying.

Two senior military officials were quoted by CNN as saying the recall of troops is part of Pakistan’s investigation into the cross-border Nato airstrike that killed 24 Pakistani soldiers.

The army spokesperson Major General Athar Abbas, however, said the decision to recall officers from the joint border posts was not intended as a protest.

“Some of them have been called back for consultation but only temporarily,” The Telegraph quoted him as saying. “This is all about improving the consultation with international forces in Afghanistan.”

The Pakistani soldiers will return to their posts after the consultations are complete, Abbas said.

Speaking to The Express Tribune late Tuesday, Captain Kirby said: “We are aware that Pakistan has decided to remove some of their liaison officers from some of the border coordination centers.  This is certainly Pakistan’s right. We hope those liaison officers can resume their duties soon inasmuch as their presence is designed to help us reduce the risk of another such incident occurring.”

With additional reporting by Huma Imtiaz in WASHINGTON