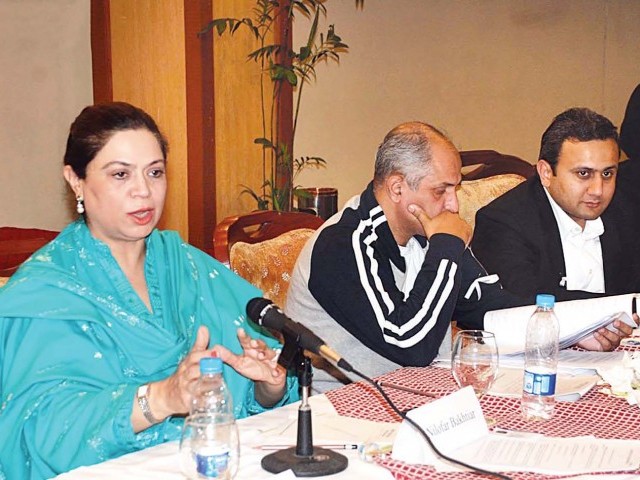 Media and civil society representatives have urged the Senate to vigorously take up the bills concerning the women protection. They were speaking at a seminar on women protection legislation arranged by Bardasht, a non-government organisation working for peace and tolerance in the society and conducted by Senator Nilofar Bakhtiar, said a press release issued by the NGO.

The senator reaffirmed her commitment to take up the two bills — the Women Protection Bill and Anti-Acid Throwing Bill — in the upper house.

“This time all efforts would be made that the bills are not lapsed as the Domestic Violence Bill had in the Senate. The civil society and media need to work hand-in-hand to keep an eye on the legislative proceedings in the Senate to ensure parliamentarians’ proactive response,” Senator Bakhtiar remarked.

Naeem Mirza, the Chief Operating Officer of Aurat Foundation, said: “Despite commercialism and rat-race for rating, the media is vigilant and has shown activism where the society needed their support badly. Once again, media’s strong support is required to ensure legislation. But, at least we would have something to base on our future struggle for the women rights.”

He was of the view that the parliamentarians are already aware of the issues and have the willingness to work on the legislation concerning the women protection. Somehow, the presence of feudal mentality in parliament creates fears and doubts.

Humaira Masihuddin, a lawyer, pointed out several sections of the Women Protection Bill that have reduced penalties and punishments against violation of inheritance, forced marriages, and in the cases of rape or attempted rape. She called for police training to deal with such crimes.

“These crimes are committed by the elite and feudal, and most of them are sitting in the parliament. They need to be sensitised on these issues to bring about a real change,” she said.

Another lawyer, Mohsin Akhtar Kiyani, said the Senate has the privilege to make any changes in the bills passed by the National Assembly but the bill would have to go to joint session of the parliament. “It is a tedious process that has made the effective legislation more difficult. However, after the 18th amendment no bill would be lapsed.”

Sharp chairman Liaquat Banori suggested amendments in the Pakistan Penal Code (PPC) to address the acid-throwing menace in our society.

“The 120-year old PPC does not provide necessary procedural code to pursue the prosecution while the cases are increasing rapidly. The Section 5 of the Bill provides interim financial relief to the victims to support their treatment while Section 13 makes photographic evidences that may delay the process,” he said.