Retd lieute­nant genera­l Talat Masood says genera­ls may be consid­ering how to distan­ce from Nato and the United States.
By AFP
Published: December 2, 2011
Tweet Email 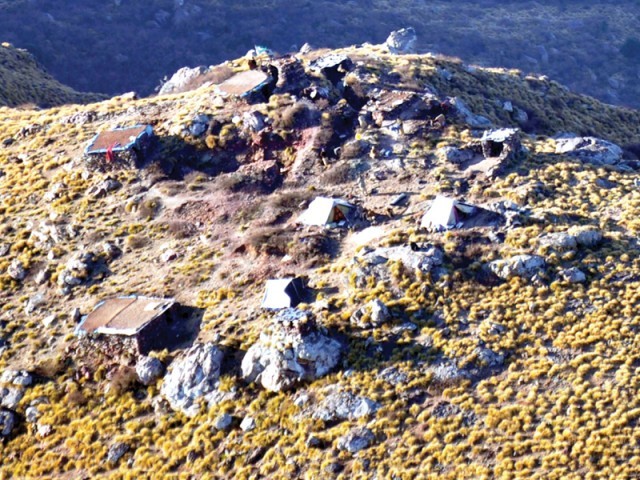 Retd lieutenant general Talat Masood says generals may be considering how to distance from Nato and the United States. PHOTO: REUTERS/FILE

ISLAMABAD: Deadly Nato strikes have sapped Pakistan’s appetite for helping the United States carve out a settlement in Afghanistan, experts say, with army chiefs under pressure from their furious junior ranks.

The killing of 24 soldiers in attacks on two Pakistani posts close to the Afghan border on Saturday has prompted fury in the nuclear-armed Muslim nation, where there is little love for the alliance with Washington.

Pakistan’s government says it will boycott an international conference on Afghanistan taking place in Germany on Monday, undermining attempts to stabilise the country after 2014 when foreign combat forces are due to leave.

“Officers were very angry,” said one person who attended. “They are also under pressure from the soldiers, mid-level officers and the families of the victims who tell them: ‘Why do you stand with people who kill our soldiers?'”

It is the second time in six months that army chief of staff General Ashfaq Kayani, considered a pragmatist and an ally in the United States, has faced the wrath of junior officers incensed over a US attack.

The army has already been weakened by the covert American raid on May 2 that killed Osama bin Laden near its top academy, humiliating the military and shocking a nation obsessed by apparent infringements of its sovereignty.

Yet Washington accuses elements of Pakistan’s military and intelligence services of collaboration with the Taliban and other Islamist militants.

Retired lieutenant general Talat Masood said that generals may now be considering how to distance themselves from Nato and the United States.

“They might withdraw from facilitating the process (bringing militants to eventual peace talks in Afghanistan). I’m not so sure they will continue to cooperate in the same manner,” said Masood, today a leading defence analyst.

“Because of so much anti-American feeling against the war they are finding it very difficult to maintain this relationship. Middle and younger officers are very angry and very upset.”

Pakistan believes it has paid too high a price for signing up to the US-led “war on terror” in the dark days after the September 11, 2001 attacks.

Homegrown Taliban are bombing cities and waging a bitter insurgency in the northwest. The government says 35,000 people have died in 10 years, including more than 3,000 soldiers killed in battles with Islamist militants.

However, the United States wants Pakistan to do more to stop Taliban infiltrating Afghanistan and take out militant havens on its soil.

The army has hardened its tone towards Washington since the bin Laden raid, leaving political parties trailing in its wake and compounding US fears that it is still playing a double game with its old friends the Taliban.

In September, Pakistan closed ranks and called for peace and reconciliation, a message destined primarily for homegrown Taliban.

The moment was well chosen: worn down by years of Pakistani offensives and American missile strikes, the domestic Taliban were more receptive. Some have even claimed that exploratory peace talks have begun.

In the past six months, attacks have dropped.

“The more tensions you have in the relationships with Washington, the less attacks there are in Pakistan,” said Pakistani analyst Rahimullah Yousufzai.

Another factor is the movement of Taliban into Afghanistan. The army says 1,000 to 1,200 foot soldiers have crossed the border in the last year.

The total number of Pakistani Taliban is thought to run into the thousands.

In Afghanistan, they have sought to take advantage of a vacuum. Nato plans to withdraw all combat troops by the end of 2014 and has already abandoned various outposts in eastern Afghanistan.

“What’s happening on the Afghan side of the border today is what happened on the Pakistani side at the end of 2001,” when Taliban members fled into Pakistan after the US invasion of Afghanistan, said one Western diplomat.

In the northwestern city of Peshawar, religious political party Jamiat Ulema-e-Islam is said to have urged local Taliban to scale back attacks at home and concentrate on fighting the Americans in Afghanistan.

“Before al Qaeda used to finance jihad and Taliban in both countries. It now focuses more on Afghanistan,” one Taliban member told AFP.

“The army was not allowing Taliban to cross to Afghanistan too much — now they do,” and Pakistanis are joining the insurgents fighting Nato, he added.

The West is nervous about the prospect of a Taliban build-up. Diplomats see a political solution, facilitated by Pakistan, as the only answer to avoiding another civil war in Afghanistan.

But in Pakistan’s eyes, that requires trust and respect from the United States, which Thursday dismissed the notion of offering an apology to Islamabad over the deaths of the 24 soldiers, saying an inquiry was still ongoing.

Pakistan has insisted the attack on its troops was unprovoked, but Afghan and Western officials have been widely reported as saying that Nato and Afghan forces called in the strikes after taking fire from Pakistani soil.

On Friday, the Wall Street Journal said Pakistani officials at a coordination centre gave the go-ahead to the air strikes, unaware that their own forces were in the area.

But such arguments hold little sway with many in Pakistan.

“You cannot accuse and abuse somebody and at the same time expect a full cooperation from him,” said Pakistani journalist and author Imtiaz Gul.