US offici­als descri­bing the attack tell Wall Street Journa­l they were told the area was clear of Pakist­ani troops.
By Web Desk
Published: December 2, 2011
Tweet Email 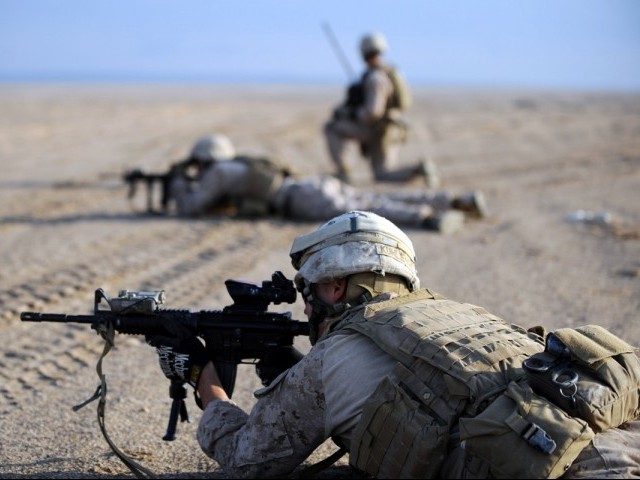 US officials describing the attack say they were told the area was clear of Pakistani troops. PHOTO: AFP/FILE

WASHINGTON: The West is striving to limit the fallout from a deadly Nato air raid on Pakistani border troops, but reports that Pakistani soldiers opened fire first on US and Afghan forces risked stoking new tensions.

Pakistani military officials gave the “go-ahead” to US airstrikes that inadvertently led to the death of 24 Pakistani soldiers in Mohmand Agency on November 26, the Wall Street Journal reported on Thursday.

US officials giving a detailed account of the attack to WSJ said that an Afghan-led assault force that included American commandos was hunting down Taliban fighters when it was fired at from the Salala checkpost along the Pakistani side of the border.

According to US officials, the commandos first thought they were being fired at by Taliban militants, but later discovered that the fire reportedly came from Pakistani troops.

This led the commandoes to request an airstrike against the assailants, who then contacted a joint border-control center to verify if there were any Pakistani troops present at the checkpost.

The Pakistani representatives at the center reportedly said that there were no Pakistani troops in the area; the US officials told the WSJ that this cleared the way for the Americans to conduct the airstrikes.

The border-control center is manned by US, Afghan and Pakistani officials who share information and divert conflicts. On November 26, however, US and Afghan forces conducting the operation had not contacted the center in advance that they planned to strike Taliban insurgents near that part of the border, an official said.

Officials working in the border-control center need to know whether Nato forces are planning operations in the border area, in order to prevent conflict. This allows the Pakistanis to notify its forces that the US and Afghan forces would be operating there.

US officials have in the past expressed reservations about notifying the Pakistanis about operations, concerned the missions’ details could leak out, the report stated.

One US official said that it is sometimes difficult to tell who is firing at the assault force, because the Taliban and Pakistani military use some of the same weaponry.

“There was absolutely no malicious, deliberate attack on the Pakistani military posts,” a US defense official said.

Other American officials said the Pakistani military should have known from the presence of helicopters in the combined US-Afghan commando force that Americans were in the area.

“If you hear American helicopters why would you lob mortars and machine gun fire at them? The Pakistanis can say we thought it was insurgents, except for the fact that the Taliban doesn’t have helicopters,” said the US official.

The United States, which depends on Pakistan as a vital lifeline to supply 130,000 foreign troops fighting in landlocked Afghanistan, on Sunday scrambled to salvage the alliance, backing a full inquiry and expressing condolences.

In retaliation for the raid, Islamabad has blocked Nato convoys from crossing into Afghanistan, ordered a review of its alliance with the US and mulled whether to boycott a key conference on Afghanistan next month.

Hundreds of enraged Pakistanis took to the streets Sunday, burning an effigy of President Barack Obama and setting fire to US flags across the country of 167 million where opposition to the government’s US alliance is rampant.

Pakistan says the attack was unprovoked.

Foreign Minister Hina Rabbani Khar telephoned US Secretary of State Hillary Clinton to convey a “deep sense of rage” as a joint funeral was held for the dead soldiers, their coffins draped in the national flag.

But a report in Monday’s Wall Street Journal — denied by Islamabad — said the Nato jets and helicopters responded to firing from a Pakistani post on the ill-defined Afghan border.

The article, which followed a similar report by Britain’s Guardian newspaper, cited three Afghan officials and one Western official as saying the air raid was called in to shield allied forces targeting Taliban fighters.

Nato and Afghan forces “were fired on from a Pakistani army base”, the unnamed Western official told the Wall Street Journal. “It was a defensive action.”

An Afghan official in Kabul was quoted as saying: “There was firing coming from the position against Afghan army soldiers who requested support and this is what happened.”

The official added that the government in Kabul believes the fire came from the Pakistani military base — and not from insurgents in the area.

One dead, up to 70 hurt in attack near Afghan NATO base