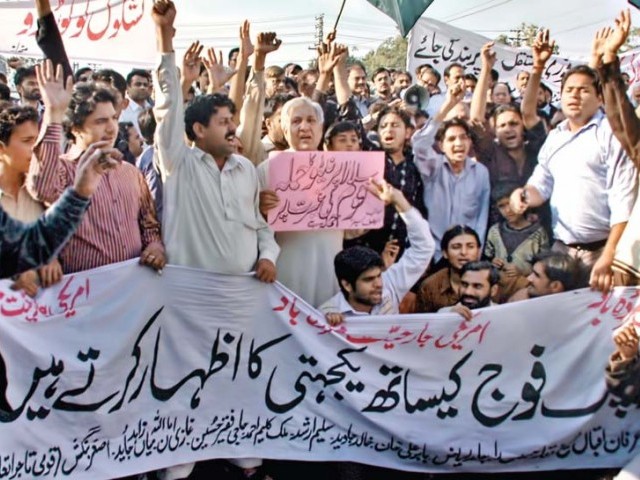 Rallies and demonstrations against the killing of 24 Pakistani soldiers in an attack near Pak-Afghan border by North Atlantic Treaty Organisation (Nato) forces continued in the city on Thursday.

PML-N activists started their rally from Gattwala and walked to the District Council Chowk where they staged a sit-in. They chanted slogans against the Nato forces and termed the attack a violation of Pakistan’s territorial sovereignty.

They supported the government’s decision to suspend permission for Nato supplies through Pakistan.

The rally taken out by PTI and its student wing also concluded at the District Council Chowk. The protesters expressed solidarity with the Armed Forces and vowed to fight against anti-Pakistan elements.

A PMA rally was attended by students of Punjab Medical College (PMC) and the District Bar Association.

The demonstrators asked the government to seek an apology as well as an assurance from Nato forces that such an incident would not happen in future. They rejected that the attack could have happened by mistake.

Lawyers’ in Bahawalpur boycotted court proceedings on Thursday in protest against the Nato attack. They said the boycott was meant to express support for the Armed Forces.

Rahim Yar Khan Chamber of Commerce and Industry in a joint resolution passed on Thursday supported the federal government’s decision to suspend Nato forces supply line. They offered fateha for the 22 soldiers who lost their lives in the attack on the checkpost near the Pak-Afghan border. APP

Off air: BBC ban an ‘intolerable interference’ in press freedom