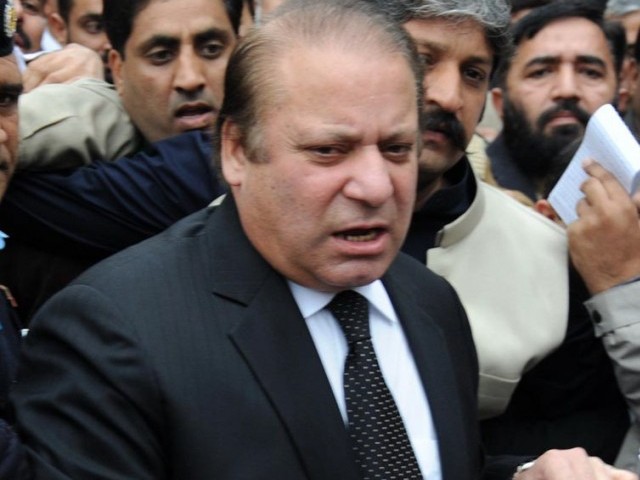 Nawaz Sharif at the Supreme Court proceeding on Thursday. PML-N has filed at least seven petitions for bringing to book the characters behind the memo affair after holding an independent probe. PHOTO: INP

ISLAMABAD: Former Prime Minister Nawaz Sharif succeeded in pushing back the memogate affair under the spotlight as he and his party members dubbed the Parliament a failure before a nine member larger bench of the Supreme Court (SC) on Thursday.

On several occasions, before finally ordering a probe into the scandal, judges reminded Sharif and his party members to limit their submissions to the legal arguments.

The Pakistan Muslim League-Nawaz (PML-N) chief said he would not have been wasting the court’s time had the parliament been keeping its word on matters involving the sovereignty and security of the country.

Nawaz, while providing evidence in the absence of his lawyer, said that Pakistani American businessman Mansoor Ijaz has proved that the memo was written after the approval of a “higher authority in Pakistan”.

The SC on Thursday gave the respondents in the memogate scandal case 15 days to submit their evidence to the apex court.

A notice was issued in this regard by the Chief Justice of Pakistan Iftikhar Mohammad Chaudhry, who said that all parties named in the petition must present their evidence in order for the memogate scandal to be investigated. Justice Iftikhar noted that the case comes under the ambit of civil and criminal law.

The court also said that former Ambassador Husain Haqqani, who has resigned over the matter, should not leave the country till the court’s decision is announced.

Meanwhile, during today’s proceedings, PML-N Senator Ishaq Dar, one of the petitioners in the case,  said the ‘Parliamentary Committee on National Security’ did not have any constitutional backing and may not be able to initiate action against the culprits.

The committee had been tasked with investigating the memogate affair.

“Such committees seldom put in real work and are formed only to sit and talk,” added Dar, when asked about the committee by the court. He said the parliament should understand it would cease to exist if it failed to have its decisions implemented.

The PML-N has filed at least seven petitions for bringing to book the characters behind the memo affair after holding an independent probe.

The Attorney General (AG) of Pakistan Maulvi Anwarul Haq, defended the parliament and said the committee set up for investigating the memo affair was validly formed and its findings should be given weight.

Justice Saqib Nisar observed if the AG was trying to say that the SC should not order a probe because the parliament was to begin investigation.

“All I am saying is that the parliamentary committee has been empowered to collect the evidence in this important affair. The court should wait for the findings before ordering an independent probe,” the AG pleaded.