"Of course it's the final word. Pakist­an is not attend­ing," offici­al confir­ms.
By Reuters
Published: November 30, 2011
Tweet Email 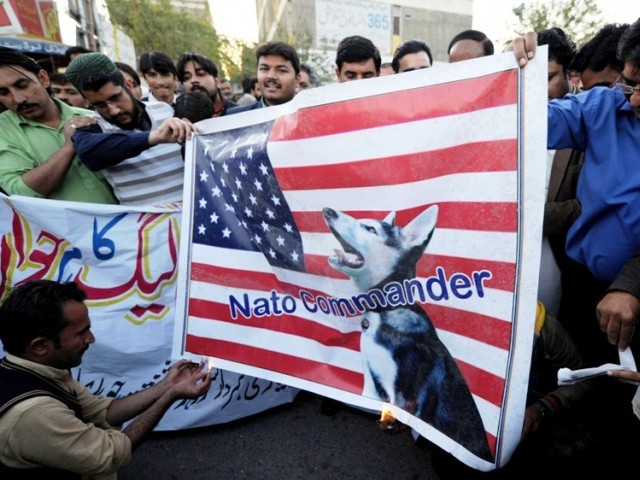 A protester sets fire to a US flag during a demonstration in Islamabad on November 30, 2011 against the cross-border NATO air strike on Pakistani troops. PHOTO: AFP

ISLAMABAD: Pakistan’s decision not to attend the Bonn conference in Germany next week, taken to protest against the Nato cross-border attack that killed 24 soldiers, is final, a foreign ministry official said on Wednesday.

“Of course it’s the final word. Pakistan is not attending,” the official told Reuters, shortly after the German government urged Islamabad to reverse its stand.

Pakistan pulled out of the conference on the future of Afghanistan on Tuesday in reaction to the “unprovoked” cross-border attack by Nato forces, that plunged US-Pakistani relations deeper into crisis.

The decision was taken at a cabinet meeting chaired by Prime Minister Yousaf Raza Gilani in Lahore.

US Secretary of State Hillary Clinton said she regretted Pakistan’s decision to boycott the conference but hoped to secure Islamabad’s cooperation in future.

“Nothing will be gained by turning our backs on mutually beneficial cooperation. Frankly it is regrettable that Pakistan has decided not to attend the conference in Bonn,” Clinton told a news conference in South Korea.

Afghan President Hamid Karzai had telephoned Gilani to urge him to reconsider the boycott of the conference, officials in both countries said.

Karzai’s deputy spokesman Siamak Herawi told AFP that Pakistan was an important participant in the conference aimed at bridging peace after 10 years of war against the Taliban, and expressed hope that they would ultimately attend.

German Chancellor Angela Merkel said she was “very sorry” about Pakistan’s announced boycott of  the conference and would try to convince it to attend.

Merkel said Germany would “see what could be done to change” Islamabad’s decision to stay away from the meeting in the western German city.

Supply routes to be restored only if NATO apologises: Ahmad Mukhtar