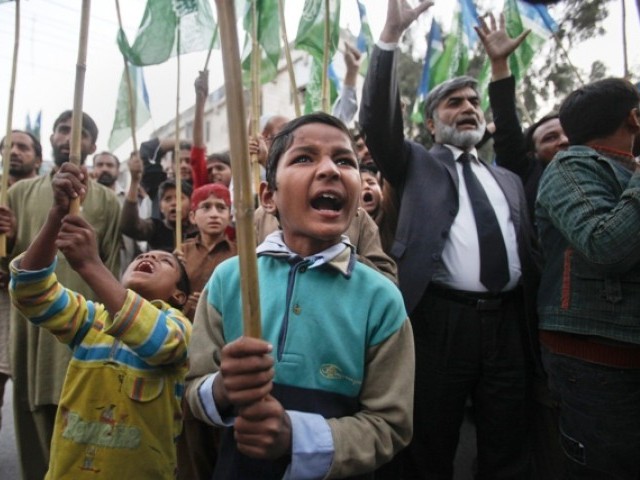 Young supporters of Jamaat-e-Islami yell anti-American slogans while protesting in Islamabad against a Nato cross-border one day earlier along the Pakistan-Afghanistan border. PHOTO: REUTERS/FILE

Afghan officials worry about a long-term damage to relations with Pakistan and regional security after the North Atlantic Treaty Organisation (Nato) attack on two military outposts located in Mohmand Agency on Monday.

Afghan foreign ministry officials urged Pakistan to not follow through on threats to boycott a conference on Afghanistan’s future that is scheduled for December 5 in Bonn, Germany.

An Afghan foreign ministry spokesman said that the Bonn Conference is the most important event of the year for Afghanistan and that it considers Pakistan’s participation as vital, given the leverage it has over some Taliban factions.

However, the Pakistani foreign office has said the government has not yet decided on whether or not to boycott the conference.

An early Saturday morning attack by North Atlantic Treaty Organisation (Nato) helicopters killed at least 24 security personnel and injured 12 soldiers on a Pakistani check post in Salala, which is located in the Tehsil Bayzai area of Mohmand Agency on the Pak-Afghan border.

The United States has been told by Pakistan’s military leadership to evacuate a logistically key airbase it operates in Balochistan – Shamsie Airbase – within 15 days. In addition, Pakistan’s fury was driven home with an official statement that it will shut down Nato supply routes operating through its territory – something that has happened for the first time, though supply routes have previously been temporarily blocked unofficially following similar attacks.