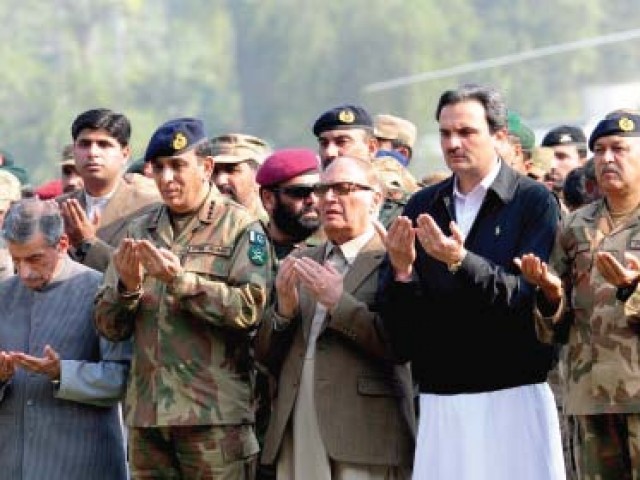 Army chief General Ashfaq Kayani prays with other military and government officials during a funeral ceremony for the soldiers (TOP). Soldiers carry the flag-draped casket of their colleague Najeebullah to his grave in his hometown of Charsadda. (RIGHT). PHOTO: REUTERS / AFP

Pakistan on Sunday buried 24 of its soldiers killed in a Nato cross-border helicopter attack a day earlier.

The incident, which was the latest perceived provocation by the United States, has infuriated the Pakistan military leadership which has termed the attack “unprovoked and unacceptable.”

On Sunday, the local media showed the funeral of the martyred officers and soldiers, with their coffins draped in green and white Pakistani flags at the headquarters of the regional command in Peshawar. The namaz was attended by Chief of Army Staff (COAS) General Ashfaq Parvez Kayani.

Meanwhile, around 500 members of Jamaat-e-Islami, staged a protest in the Mohmand tribal area, where the Nato attack took place.

Jamaat-e-Islami activists also vowed to stand by the Pakistan Army for the country’s sovereignty and defence. The elders announced their support in a press conference organised by the party.

The gathering was organised in the Mian Mandi area of the Mohmand Agency, Express 24/7 reported.

“Down with America” and “Jihad is the only answer to America”, they yelled.

The army chief also paid a visit to the injured soldiers of the Salala Nato attack at the Combined Military Hospital (CMH) Peshawar.

The bodies of the slain soldiers were then dispatched to their native towns. The dead included a major and a captain.

The soldiers were killed early on Saturday in the Salala locality of Baezai tehsil in Mohmand, when Nato helicopters and fighter planes targeted two check-posts.

Subedar Munawar Hussain’s body, one of the victims of the attack, reached his ancestral town of Nikayal Gharbi in the Kotli district of Azad Jammu & Kashmir (AJK) Sunday night for the burial, official sources confirmed.

Kotli Superintendent Police Sardar Gulfraz Khan told The Express Tribune that the body of Hussain was flown to Kotli on Sunday afternoon and was later taken to his native village Nikayal. The martyred soldier leaves behind three sons, two daughters and a widow, according to local police sources who collected details from Hussain’s family.

Details about the arrival of the bodies of the other two soldiers were still unclear.

Relatives of Major Mujahid Hussain and Captain Usman Ali said that the soldiers “sacrificed their lives” for the sake of their country, and they were proud of their sacrifices.

Major Hussain hailed from Ratodero, Larkana, and had joined the Pakistan Army nine years ago. His body will be taken to his native village after being honoured at the General Headquarters and Pannu Aqil cantonment.

His family said that they will not “hesitate to offer any sacrifice” for Pakistan.

Captain Ali from Sahiwal, left behind a widow and a young daughter.  The 23-year-old soldier got married last year and was recently promoted to the rank of captain. Usman’s father said his son joined the ranks due to his patriotism. (WITH ADDITIONAL REPORTING BY OUR CORRESPONDENTS IN HYDERABAD AND PESHAWAR, AND INPUT FROM REUTERS)

After NRO verdict, there may be more bad news for govt