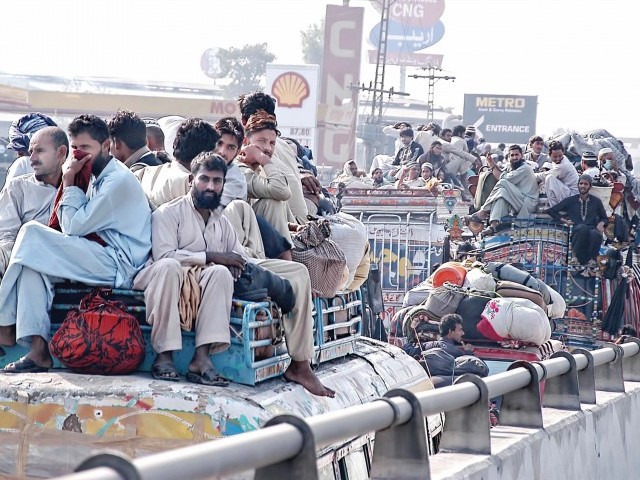 Participants of the ijtema on their way home. PHOTO: IJAZ MAHMOOD/EXPRESS

LAHORE: Around half a million people took part in the first four-day session of the Raiwind Tableeghi Ijtema, which ended on Sunday.

Participants in the ijtema, which is the biggest regular gathering of people in Pakistan, began leaving the city at around 10:30am and continued streaming out all day. Traffic police had blocked roads around the venue and opened both sides of Raiwind Road for vehicles leaving the city. At the venue, the visitors on bikes were the first to leave, followed by pedestrians and then cars and buses.

Maulana Zubairul Hassan led the concluding prayers and in his sermon called for world peace and for the solidarity, integrity and long life of the country. At the start of the congregation, Tableeghi Jamaat Ameer Maulana Haji Abdul Wahhab called for unity, brotherhood and peace in the Ummah.

Some 3,000 police officers and 5,000 razakars (volunteers) were on security duty at the ijtema, while a huge ‘tent city’ including a market with more than 400 makeshift shops and thousands of residential tents was set up to accommodate the guests.

Saddar SP Shoaib Khurram Janbaz said that the police were conducting regular search operations in the area looking out for suspicious activities. He said two suspects were taken into custody on Friday and six on Saturday night. Two were booked for extortion and carrying illegal weapons, while six were allowed to go free after they produced identity documents. He said that more than half a million people had participated in the ijtema.

The second session of the ijtema will run from November 24 to 27.

‘Iqbal can help us face imperialists’