State Depart­ment says they still consid­er Haqqan­i to be Pakist­an's Ambass­ador to the US.
By Huma Imtiaz
Published: November 19, 2011
Tweet Email 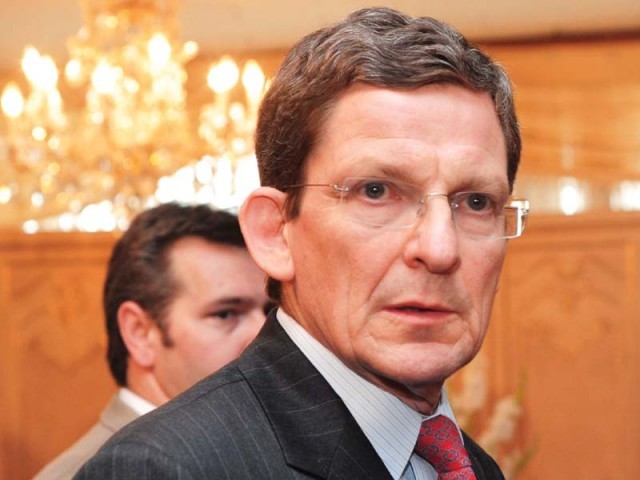 Grossman told Haqqani that he had never seen the memo till it was made public.

WASHINGTON: As Memogate continues in Pakistan and the United States, Pakistani Ambassador Husain Haqqani met with the US Special Representative for Afghanistan and Pakistan Ambassador Marc Grossman hours before boarding a flight back home.

A State Department official, who did not wish to be named, said that the case of the memo was discussed in the meeting.

The official added that Ambassador Grossman said he had never seen the memo until it was made public. He also referred back to Admiral Mullen’s comments on the memo.

In comments issued via his spokesperson in Foreign Policy, Admiral Mullen did not find the memo credible when he received it.

Earlier on Friday, the State Department spokesperson Mark Toner told reporters at the press briefing that he was not going to engage in speculation. “Our understanding is that he’s still the ambassador of Pakistan to the United States, and we continue to have regular interactions with him, as we do with a number of people with – both within the Pakistani Government.”

Toner added that the United States “clearly support the democratically elected Government of Pakistan, as well as its constitutional processes.”

Haqqani on a flight to Pakistan

Pakistan’s Ambassador waved good bye to America, maybe the last time as a Pakistani envoy to the US, as he boarded a flight back to his motherland.

Minutes before his flight was to take off, the ambassador tweeted:

On way to motherland. #Pakistan