Heavy rainfa­ll has led to crisis in the Sialko­t distri­ct, as dozens of trees fell on the main roads.
Published: July 22, 2010
Tweet Email 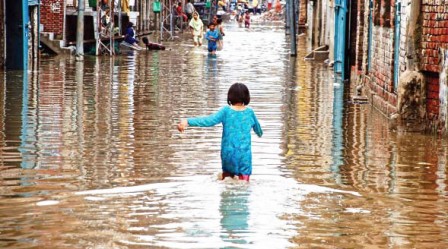 Heavy rainfall has led to crisis in the Sialkot district, as dozens of trees were recently uprooted and fell on the main roads including under construction passages. The Daska-Gujranwala Road, Sialkot-Pasrur Road, Sialkot-Sambrial-Wazirabad Road, Pasrur-Narowal Road and adjoining areas remained blocked for several hours on Wednesday.

The rain has severely compromised electricity and communication systems in the district as power supply remained suspended for several hours in urban and rural areas throughout the district. “It feels like the city is flooded, there is no where to walk and several houses have been completely destroyed,” Pasrur resident Karimullah said.

The downpour started early on Wednesday morning and continued throughout the day. After the prevailing heat-wave in the district, locals have expressed relief at cooler temperatures following the rain. “We can never really enjoy the rain, because it always means floods and damage but it is a relief from the heat,” Sambrial resident Shabana said. “The day has been dark and cloudy and the rain has caused a halt in regular activity but I am still grateful for the rains,” she said. The rainfall has affected all low-lying urban and rural areas in the Sialkot region, paralyzing normal life. “Despite all the problems, people still always come out in the flooded streets to enjoy the rain,” resident Shahnawaz said.

“The sewerage water has mixed with rain water and we already know that by the time the water ebbs a bout of diseases will spread throughout the district,” Shahnawaz said.  “As usual the TMA is nowhere to be found,” he added.

Paddy growers have welcomed the heavy rain and have termed the rain as a major relief for the cultivation of paddy crops in the region. Sialkot is a hub for producing the best quality bumper paddy yield in the country.

Sialkot Met office has forecast more heavy rain in the days to come and has also reported thunder storms within the next 24 hours.

Who you gonna’ call?