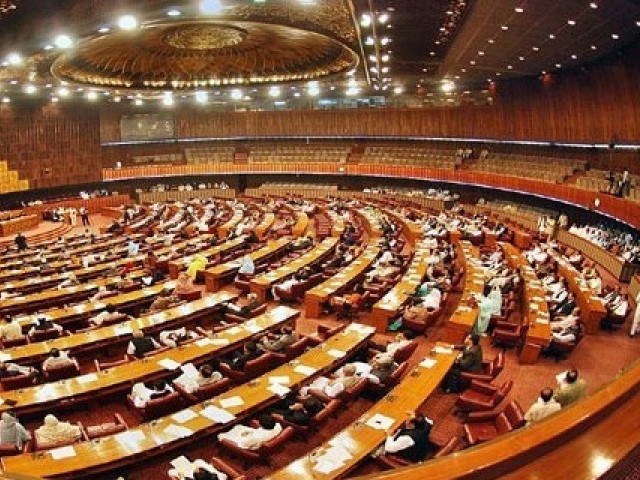 The historical bill was tabled by Member of National Assembly Dr Donya Aziz. The bill is aimed at prohibiting exploitation and discrimination against women. PHOTO: APP/FILE

ISLAMABAD: The women of the National Assembly do not give up easily.

The Prevention of Anti-Women Practices (Criminal Law Amendment) Act 2011, which was authored by Pakistan Muslim League-Quaid MNA Dr Donya Aziz, had remained stuck for three years, first in various NA committees and then the house itself. However, after a couple of amendments were incorporated into the final draft, the bill was unanimously passed by the lower house, which is incidentally headed by a woman Speaker Dr Fehmida Mirza.

The act, hailed by commentators as a show of collective resolve by political parties to fight social taboos against women, deals with issues such as depriving women their inheritance and forcing them into marriage to settle disputes.

The bill outlines strong punishments for social practices like wanni, swara or budla-i-sulh, wherein women are traded to settle personal, family or tribal disputes. For the first time, the bill proposes a minimum benchmark for penalising those involved in “anti-women practices”.

However, the bill does not propose a mechanism to ensure that such cases are reported and reach a court of law, which is a necessity as these crimes often go unchecked and unreported.

Mirza, who had sent the draft to the law ministry last month for vetting, congratulated the house and the author of the bill moments after MNAs voted to pass the legislation.

Congratulations also poured in from Prime Minister Yousaf Raza Gilani who said that the Pakistan Peoples Party (PPP) and its democratic government had always risen above party politics when it came to the rights of women. “All legislators of the PPP lent their full support to this bill and I will continue to lend my support to its implementation,” he said.

In her statement of objects and reasons, Aziz wrote that the legislation aimed to reduce social injustice against women by proposing severe punishments.

The bill was deferred last month after a member from the Pakistan Muslim League-Nawaz objected that proposing a minimum limit for a crime would be in contradiction with the basic spirit of the law.

Fair treatment for the fairer sex

• Bartering a woman in such a way to be punishable by three to five     years imprisonment and a fine of Rs0.5 million

• Forced marriages (other than those for settling disputes) to be             punishable by between three and 10 years imprisonment and a fine     of Rs0.5 million

• Forcing a woman to “marry” the Holy Quran to result in a jail term   of three to seven years and a fine of Rs0.5 million

Brain scanner used to communicate with patients in vegetative state