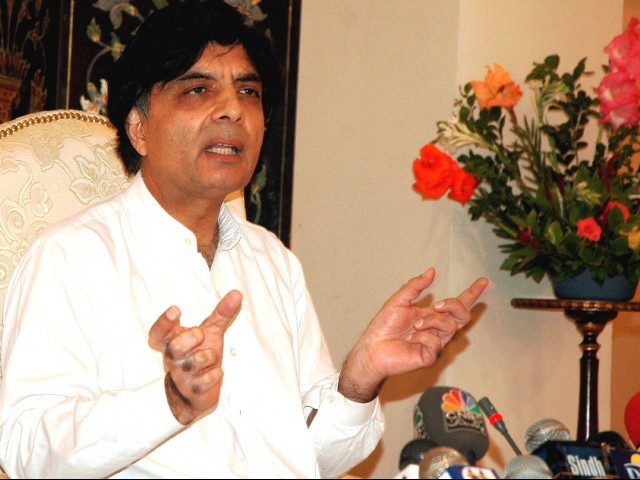 Hakeem claimed that Nisar has damaged the credibility of Nadra and is claiming damages worth Rs10 billion. PHOTO: FILE

ISLAMABAD: A massive civil suit worth Rs10 billion was filed against Leader of the Opposition in the National Assembly Chaudhry Nisar Ali Khan by  the National Database and Registration Authority, for ‘damaging the credibility’ of the organisation.

The suit, filed by plaintiff NADRA in the Islamabad High Court (IHC), identified Nisar as well as the Punjab chief secretary and station house officer (SHO) of the Civil Lines Police Station as respondents. The plaintiff contended that Pakistan Muslim League-Nawaz (PML-N) leader Nisar had seriously damaged the reputation of NADRA through various “false allegations on different occasions”.

The accusations made by Nisar include blaming NADRA officials of preparing fake identity cards for employees of Bahria Town housing society, developed by real estate tycoon Malik Riaz. The housing scheme lies within NA-52 in Rawalpindi, which is considered PML-N’s home constituency.

On these identity cards, temporary addresses of settlers living in NA-52 were changed, so that they appeared to be permanent residents of the constituency. Allegedly, this was meant to influence the next general elections by making ‘permanent’ residents voters in NA-52. Riaz earlier accused the opposition leader of using the police to pressurise him into extending political support to him.

NADRA’s side of the story

According to the lawsuit, NADRA maintains that in February, the management of the housing scheme requested the authority to establish mobile registration vehicles (MRVs) for the registration of their employees in Rawalpindi, and NADRA established three of these MRVs on their request.

NADRA also alleged that while some of their officials worked in Bahria Town in March, their MRVs were attacked by people and they were arrested by police on the behest of Nisar.

The plaintiff further maintained that during a period of one month, as many as 3,904 applications were received by NADRA while making CNICs in the locality. On March 8, however, a legal notice was served to NADRA Chairman Arshad Ali Hakeem stating that this was illegal practice and NADRA officials, “at the behest of certain elements” were issuing fake identity cards in NA-52.

Justice Riaz Ahmed Khan is to take up the case today (Tuesday).