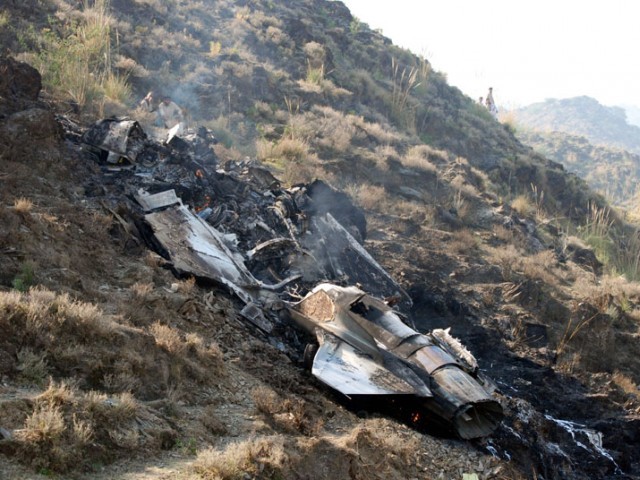 Pilot dies after his parachute failed to open. PHOTO: AFP

ISLAMABAD: Pakistan’s ambitions to sell JF-17 fighter jets to prospective buyers suffered a setback on Monday when one of the aircraft in the ‘Thunder’ fleet crashed in Attock district during a routine flight, killing the pilot.

The tragic incident took place a day after Pakistan Air Force (PAF) exhibited the jets for sale at the Dubai Air Show, at a price almost one third of conventional F-16 fighter jets.

The jet crashed near Mansar Town after taking off from Kamra Airbase.

Although PAF officials did not offer any comments on the crash, several media reports highlighted that the jet was a frontline JF-17 Thunder combat manufactured with cooperation of China.

An official statement released by PAF authorities, however, did not mention the make of the plane. “A PAF jet aircraft, while on a routine training mission, crashed due to technical malfunction,” it said.

The PAF is in process to equip itself with two squadrons of JF-17 jets at present and planning to raise another squadron by early next year.

Media reports suggested that the pilot, Squadron Leader Muhammad Hussain, was killed as his parachute did not open after he bailed out of the aircraft. The pilot’s body was found about two kilometers from the site of the crash.

“The pilot was fatally injured. No loss of civilian life or property has been reported on ground,” added the statement.

The law enforcement agencies cordoned off the area after the incident. PAF rescue teams have launched an operation to clear the debris after dispatching helicopters and rescue teams to the crash site.