The leases of crush machin­e owners were suspen­ded in 2006.
By Muhammad Sadaqat
Published: November 12, 2011
Tweet Email 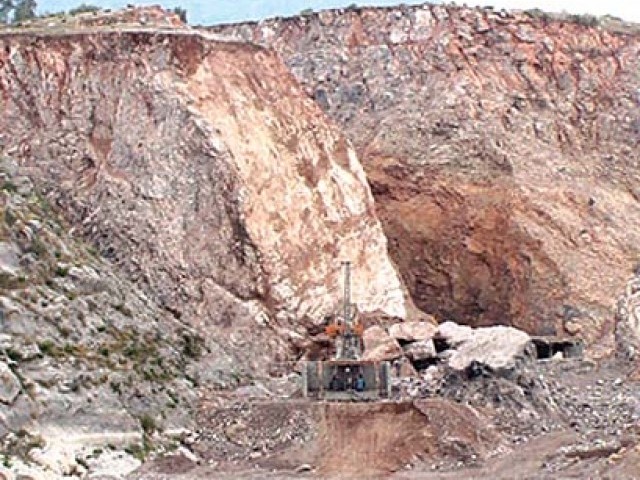 A view of Khanpur Dam, which is a major source of drinking and irrigation water (right); the dam’s structure is endangered by illegal stone crushing (top). PHOTOS: MUHAMMAD SADAQAT/FILE

Quarrying takes place on hillocks near the dam on a daily basis, an activity that has been ongoing for the past several years. There are over 22 crush machines installed by private owners along the Haro River, a few metres from Khanpur Dam’s spillway and left bank canal. Stones crushed into gravel and sand are used for construction purposes.

According to official sources, the dynamite blasts not only produce clouds of dust, but also cause underground vibrations, producing seismic waves at the centre of the dam.

Following an internal report of prospective dangers to the dam’s structure, the authorities approached the Khyber-Pakhtunkhwa (K-P) Mines and Minerals Department in 2006, seeking cancellation of the leases of machine owners. The department suspended the leases of all the owners and declared the area ‘reserved’ through a letter issued on October 20, 2006.

When machine owners moved the Peshawar High Court Abbottabad Bench to challenge the suspension, the court upheld the department’s decision.

However, despite the court’s decision, quarrying continues to take place. According to an official requesting anonymity, a single blast uses nearly two kilograms of dynamite, which is enough to cause vibrations in the rocks holding the dam and its spillway.

“There is no proper mechanism to carry out the blasts and it is likely that a high intensity blast can result in a mishap,” he added.

He said he had sent a letter to the environment department and the district coordination officer to take action against the illegal activity, but he has yet to receive a positive response.

“We also asked Peshawar Electric Supply Company (Pesco) to suspend power supply to the machine owners, but the owners moved the court against Pesco and the litigation is still pending,” he explained.

He went on to say that the Water and Power Development Authority (Wapda) has pointed out the impending dangers to the dam in a report compiled in 2007, but machine owners have shown little concern with this.

In addition, sources also accused machine owners of dumping pollutants in the river, blocking the water channel at several locations which could prove disastrous to the local population.

Meanwhile, Sajid Shah, a machine owner, claimed that they are using dynamite according to the permissible limits under a license, which did not pose any threat to the dam’s structure.

He was of the view that suspension of their leases is tantamount to snatching livelihood from hundreds of workers and indirect beneficiaries of the stone-crushing business. “The crushers have moved the court against Wapda again and the trial is still going on,” he said.

Built in 1983 at a cost of Rs1.35 billion, Khanpur Dam is the main source of drinking and irrigation water for Islamabad and some parts of K-P and northern Punjab. The dam’s reservoir supplies 50 cusecs of water to Islamabad, 36 cusecs to K-P, 35 cusecs to Punjab and 0.4 cusecs to military organisations daily, while Fecto Cement receives 2.18 cusecs from the left bank canal. The right bank canal also supplies 43 cusecs of water to K-P and 17 cusecs to Punjab for irrigation purposes.